BTC Dominance Is At A 3-Year Low

Alt-coins are once again outperforming, with ETH making new record highs of about USD 4,150 overnight. Spot volumes are largely in-line with the 30-day average.

Crypto Story of the Day

BTC dominance is at a 3-year low (see Chart Of The Day). Alt-coins have added USD 1.1 trillion to market cap in 2021, double the growth of BTC’s.

BTC dominance began the year at around 70% and the metric has since seen a sustained drop while alt-coins have outperformed, notably Ripple (XRP), Ethereum (ETH), Binance Coin (BNB), and DOGE. Since the December 2020 SEC investigation against its issuer, Ripple, XRP has increased its market cap by more than 2x to a current USD 54.9 billion. ETH, since the launch of Beacon Chain on December 1, has seen an addition of roughly USD 384 billion.

ETH’s rally comes in parallel to record capital locked in various DeFi venues based on the network, which has reached USD 87.1 billion.

At the same time, broad interest in the cryptocurrency space is at multi-year highs. For example, searches for “cryptocurrency” have been elevated since the start of the year and are currently 71% of all-time highs achieved in January 2018. Latest search volumes for “ethereum” have more than doubled previous all-time highs from 2018.

Over the past week, the highest concentration of Google searches for “cryptocurrency” has come from Nigeria, Australia, Singapore, UAE, and Cyprus, in that order. Moreover, DOGE has become the only alt-coin to overtake BTC in Google search interest.

At the same time, social media data, notably Reddit, suggests outsized attention afforded to alt-coins vs. BTC in respect to coins’ market caps. Reddit engagement on the cryptocurrency forum reached all-time highs in April and continues to show elevated levels. This pattern of alt-coin focus has extended to traditional media, as well. For example, Bloomberg has given DOGE considerable attention, with 46 mentions over the past 3 weeks on Twitter compared to 61 of BTC and 22 or ETH.

BTC dominance declines have been associated with frenzied crypto markets; this has been an indication that markets are stretched, which in turn tends to precede sell offs. In 2017 and 2018, XRP, for example, saw its market cap jump from USD 9 billion on December 10 to USD 132 billion on January 7, to only fall to as low USD 32 billion less than a month later.

The repeat of patterns seen in 2017 suggests that the perceived crypto adoption seen over the last year hasn’t been followed by a growing understanding of the asset class. In both 2017 and 2021, alt-coin rallies have placed narratives over most fundamental considerations. Traditional financial media, for example, has largely failed to scrutinize any of the risks associated with Ethereum’s transition to proof-of-stake in its ample coverage of the asset.

Finally, given that the crypto market cap totaled roughly USD 850 million at its top in 2018, compared to a current USD 2.4 trillion, the implications of a massive unwind of alt-coins are unknown.

Chart Of The Day 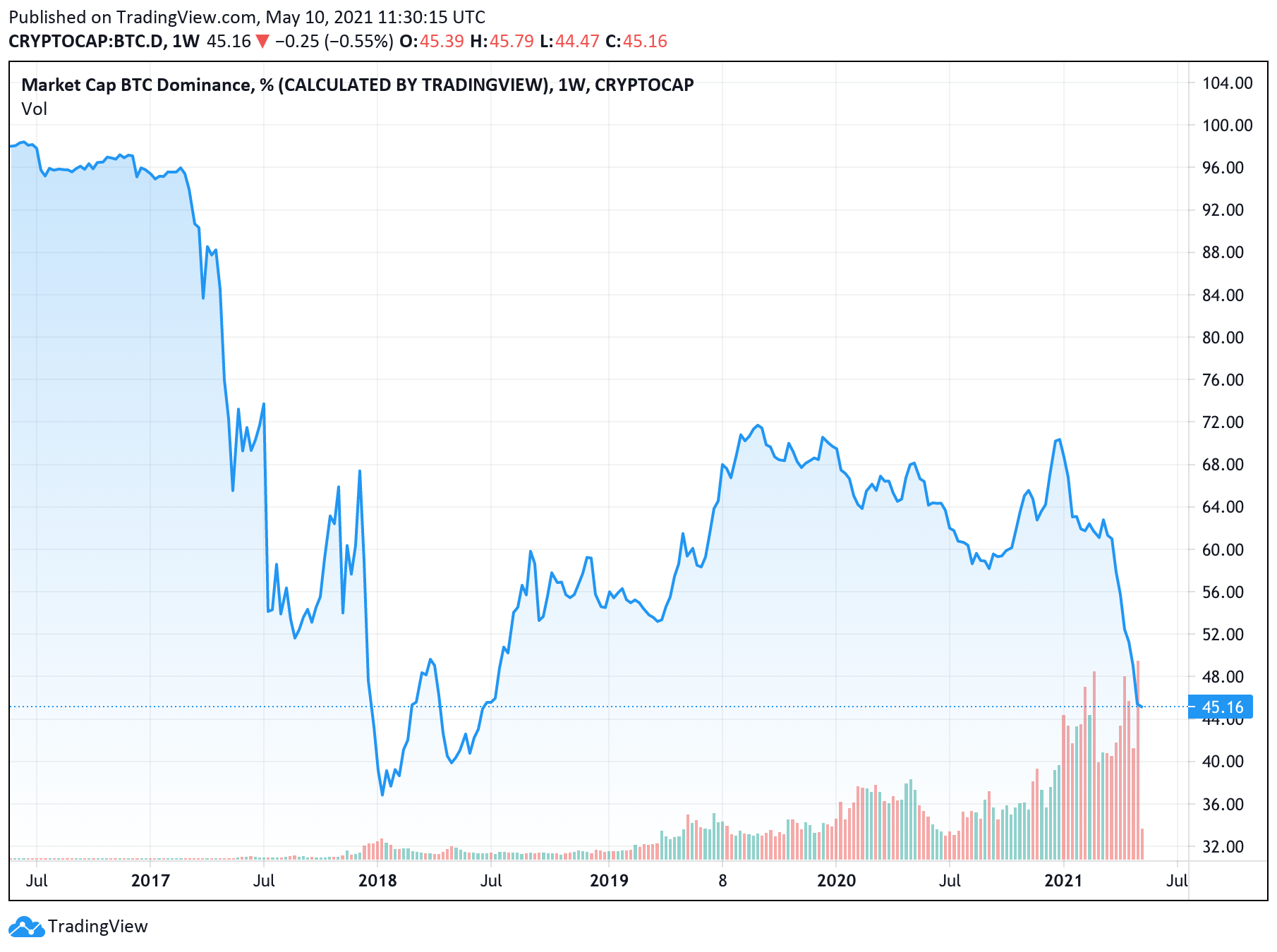 BTC’s share of the aggregate crypto market cap has continued to decline since December 2020, when it reached about 70%.

Please sign up for a free trial of FRNT Financial Morning Note.

Read More: BTC Dominance Is At A 3-Year Low