The Hourly View for LTC

Currently, LTC’s price is up $1.15 (0.9%) from the hour prior. LTC has seen its price go up 8 out of the past 10 hours, thus creating some compelling opportunities for bulls. If you’re a trend trader, consider that the strongest clear trend on the hourly chart exists on the 50 hour timeframe. Most noteworthy in the world of moving averages on the hourly chart is that the 100 hour moving average has been crossed, with price now being above it. The moving averages on the hourly timeframe suggest a bullishness in price, as the 20, 50, 100 and 200 are all in a bullish alignment — meaning the shorter durations are above the longer duration averages, implying a sound upward trend.

The back and forth price flow continues for Litecoin, which started today off at 126.75 US dollars, up 1.24% ($1.55) from the previous day. The price move occurred on volume that was down 18.3% from the day prior, but up 29.79% from the same day the week before. Relative to other instruments in the Top Cryptos asset class, Litecoin ranked 4th since the previous day in terms of percentage price change. Below is a daily price chart of Litecoin. 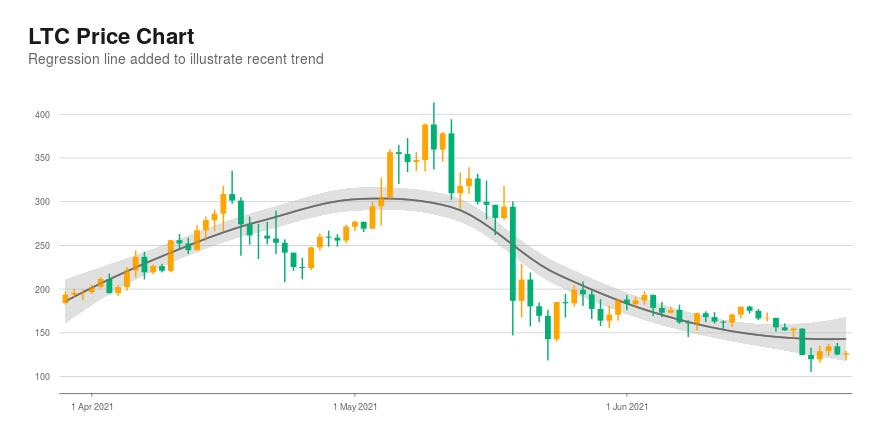 Trend traders will want to observe that the strongest trend appears on the 14 day horizon; over that time period, price has been moving down. For another vantage point, consider that Litecoin’s price has gone up 7 of the previous 14 trading days. As for those who trade off of candlesticks, we should note that we’re seeing pin bar pattern appearing here.

Over on Twitter, here were the top tweets about Litecoin:

For a longer news piece related to LTC that’s been generating discussion, check out:

Litecoin Price Analysis, Is LTC Rally The Next Dogecoin?

Litecoin price rally is also speculated to showcase a similar trend as dogecoin….And hence litecoin price like the dogecoin price is slipping to their respective initial levels.