XRP price has not plotted a constructive outlook for the international settlements token, leaving very few alternatives and plenty of uncertainty about the future outlook. For now, investors need to focus on the dominant support and resistance levels for clues about Ripple intentions heading into the summer months.

Barclays, the UK financial institution, suspended all debit and credit card payments from the UK to Binance, the leading cryptocurrency exchange. In the announcement, Barclays referenced the recent decision by the Financial Conduct Authority (FCA) to ban Binance from operating in the UK. As part of the FCA decision, crypto derivatives products were banned, a large source of business for Binance.

The Barclays decision compelled Ripple’s CTO David Schwartz to respond on Twitter to a message from the Barclays UK Help account, emphasizing the importance of freedom of choice in light of the negative repercussions of the FCA announcement.

We live in a world where banks “protect” people’s money from being sent to the place they specifically asked to send it, where banks keep your money “safe” from going where you want it to go. 1/2 https://t.co/c3FzB1HN89

One of the defining attributes of the crypto ecosystem is that it seeks to place more control in the hands of the users. It enables them to decide what to do with their money without stressing about the control of governments and regulatory agencies using concepts such as safety to justify intrusive measures.

The Barclays decision is a manifestation of the efforts of governments and their regulatory agencies to prevent a loss of control and tracking ability by restricting crypto as much as possible.

David Schwartz affirmed this analysis, saying that the financial institution’s decision on Binance payments limited customer options and the freedom to choose for themselves.

In a quarter of massive declines and equally impressive rebounds, XRP price closed 2Q up 24%, marking one of the better quarters in the cryptocurrency complex. However, the consecutive 30% declines in May and June did reverse the technical victories on the chart, leaving Ripple in a challenging position, despite the 45% rebound from June low of $0.512.

The XRP price rebound did not last long, and the cross-border remittances token slipped into a rising wedge formation that triggered on July 1, quickly putting the support level of $0.650 in play. Ripple has been holding the critical level for the last five days.

The Ripple rising wedge pattern’s measured move is approximately 30%, suggesting that XRP price will push below the 78.6% Fibonacci retracement level at $0.555 and the June 21 low of $0.512 before bottoming around the measured move target of $0.477. From the current price, it translates into a 28% decline.

If selling pressure remains notable, XRP price has no visible support below the measured move target, heightening the pressure on bullish Ripple speculators. 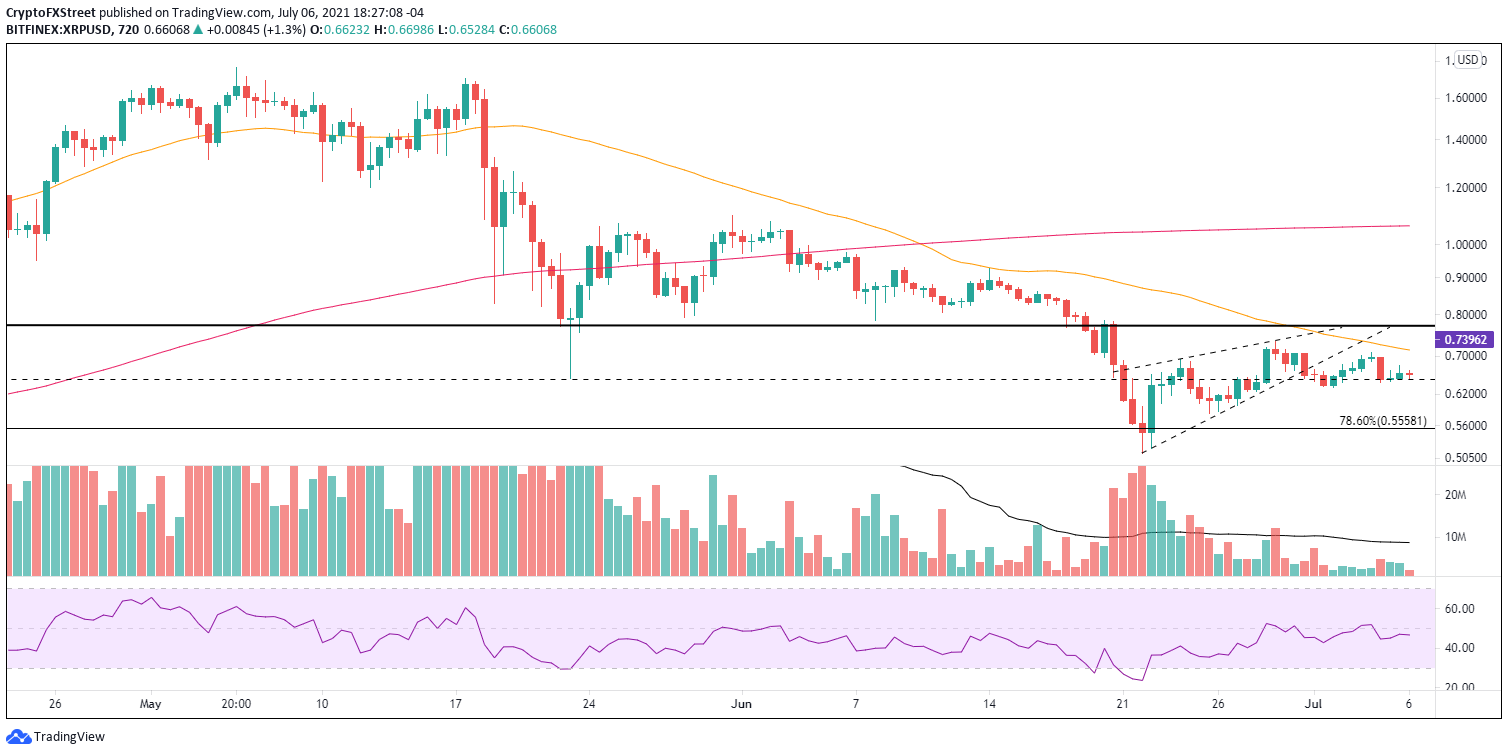 Due to the clarity of the price structure from the June 22 low and the unquestionable resistance in the range of $0.740-$0.760, Ripple requires a daily close above $0.760 to resolve the dominant bearish narrative.

Despite the bearishness inspired by the charts, there is the potential for XRP price to collapse into a trading range between $0.555 and $0.760, thereby exposing attractive trading conditions for swing and day traders due to the fortified support and resistance levels. For long-term investors, Ripple remains dead money under $0.760.

For now, the risk is to the downside, and any emergence of heavy selling in the cryptocurrency complex will doom XRP price to a 30% decline.

Here, FXStreet’s analysts evaluate where Ripple could be heading next as it seems bound for a correction.

What is tether cryptocurrency (USDT)? All you need to know