XRP price is primed for a 200% breakout

XRP price has been consolidating below a crucial trend line for nearly two months. However, a breakout seems to be around the corner as Ripple gets squeezed between vital support levels and resistance barriers.

The next breakout to occur will be one to behold as it could hold the key to a rally that could retest 2018 levels.

XRP price has been forming multiple bullish patterns on a higher time frame, signaling a bright future. Considering the price action between August 9 and November 2, the remittance token has set up six lower highs and roughly five higher lows.

Connecting these swing points using trend lines results in the formation of a symmetrical triangle pattern. As XRP price progresses through this formation, it gets squeezed, indicating a substantial reduction in volatility. This technical setup forecasts an 80% upswing, determined by adding the distance between the first swing high and swing low to the breakout point.

A decisive close above $1.137, coinciding with the 50% Fibonacci retracement level, will confirm the start of an uptrend. Such a move will propel XRP price to the supply zone, ranging from $1.237 to $1.417. 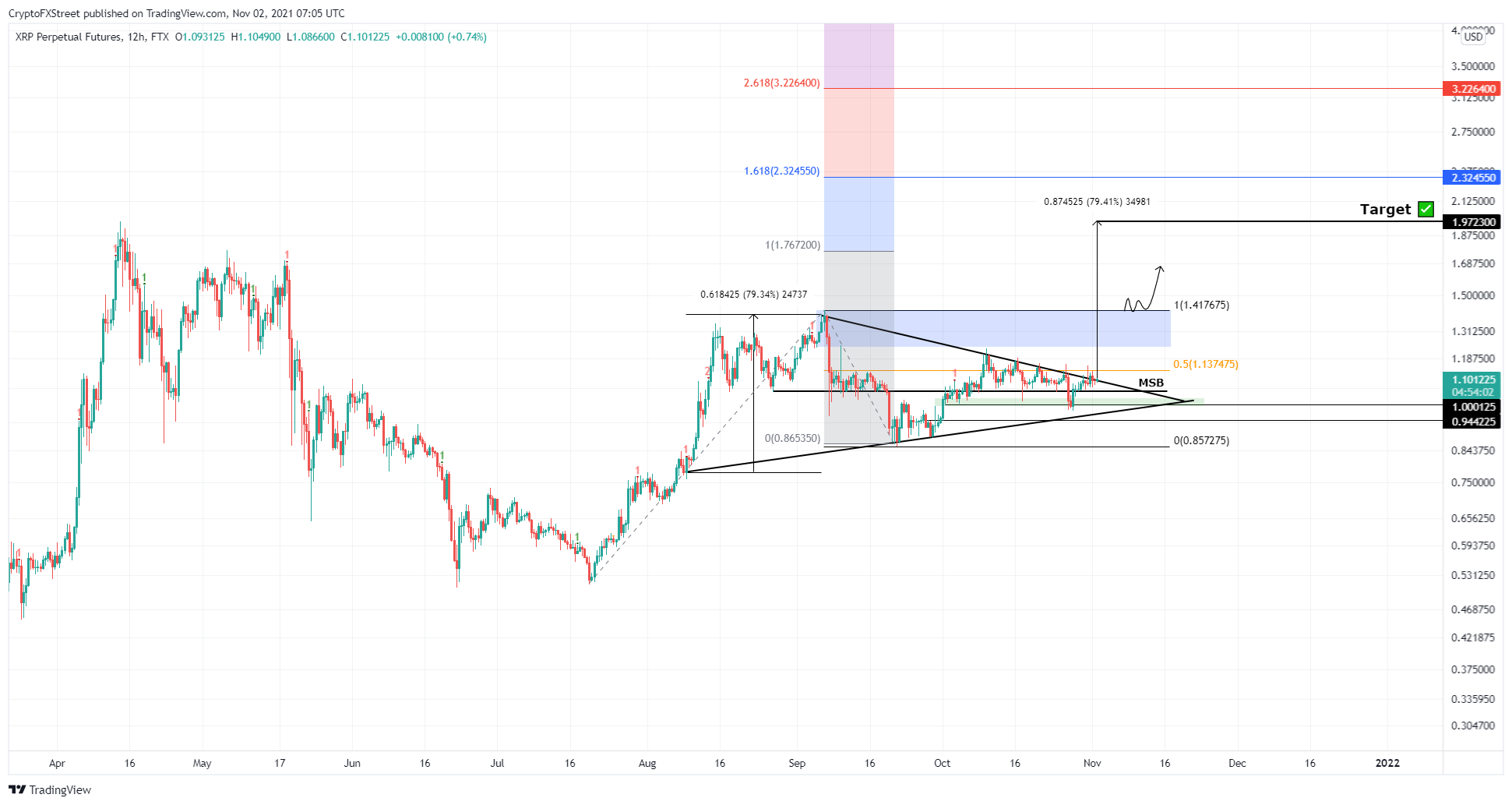 While the technicals predict a bold target for XRP price, the on-chain metrics back up this claim with a highly bullish outlook.

XRP network growth is a metric that tracks the number of new addresses being created on the XRP Ledger (XRPL). A spike in this measure suggests an increase in investor activity, as a result, it could indicate a potential inflow of new capital.

Lately, this fundamental index has skyrocketed past 2021 highs, hinting that a massive and explosive move is brewing for the remittance token.

Similar growth is being witnessed in the daily active addresses (DAA), which is currently hovering around 75,000. This level was last seen roughly 540 days ago, indicating a tremendous interest among investors in XRP at current price levels.

While these two on-chain metrics are going crazy, the volume transacted on the XRPL has not increased significantly. It is hovering under $4 billion and has been declining since August. Often, when a breakout is accompanied by an increase in volume it is more reliable. Investors should pay close attention to this metric, therefore, to time the breakout and confirm it.

While technical and on-chain metrics are leaning bullish, Ripple’s recent quarterly report shows that it saw a 200%+ increase in its XRP sales quarter-over-quarter. Interestingly, this sale comes from its product On-Demand Liquidity (ODL) which leverages the use of XRP to transfer money across borders.

Despite the SEC’s lawsuit against XRP and Ripple, its sales have zoomed past previous highs, and the report adds,

Transaction volume (measured in dollars) over RippleNet has more than doubled since last year and ODL transactions are up 130% quarter over quarter. In Q3, ODL transactions accounted for ~25% of total volume. All XRP sales this quarter are attributed to the growth and adoption of ODL.

Additionally, Ripple forayed into the NFT market by allocating a $250 million Creator Fund to support creators, brands and marketplaces to explore new use cases for non-fungible tokens (NFTs) on the XRP Ledger.

On the CBDC front, Ripple is collaborating with the Royal Monetary Authority of Bhutan “to pilot a Central Bank Digital Currency (CBDC) using Ripple’s CBDC solution.” This fundamental growth coupled with bullish technicals and on-chain metrics leads us to believe a colossal breakout move is on the horizon.

Read More: XRP price is primed for a 200% breakout

Solana Crypto Has Near-30% Upside Potential