Some carried signs saying “COVID is a $cam” or “covid-19 medical mandates threaten first responders.” Others handed out pamphlets for local groups attendees could join to resist coronavirus rules.

Amy Bohn, one of the organizers from the group Protection of the Educational Rights of Kids, said she and others are concerned about the ripple effects that would come from a large number of firefighters and police officers losing their jobs if they don’t comply with vaccine mandates for city workers.

“They shouldn’t be losing their jobs,” she said.

Chris, who declined to give his last name, carried a sign saying “I thought I was essential.” Chris said he’s been a Long Beach firefighter for 15 years, and his colleagues in the LBFD are worried about losing their jobs.

“There is a group that is definitely going to leave,” he said, as an ambulance passed by on Ocean Boulevard, blaring its horn, drawing cheers from the crowd. Ambulances drove by with their sirens on two other times as well, honking their horns on each pass as attendees cheered in response.

Chris added that the people now instituting mandates seemed to love first-responders when they were handling emergencies in tough conditions during the worst of the pandemic, but no more. “We’re so easy to be disposed of by the politicians,” he said.

A few parents who have been protesting mask and vaccine mandates at Long Beach Unified schools were also at the rally. Jana Deeboe said she feels like a shunned minority in a city that’s known for embracing diversity.

“It goes against everything I know Long Beach to be,” she said.

The protest comes a day after thousands of people rallied in downtown Los Angeles. They decried that city’s vaccine requirements, which are among the strictest in the nation.

Los Angeles, for instance, has warned city workers they should expect to be terminated if they haven’t received an exemption or been vaccinated by Dec. 18.

Other sweeping rules also went into effect in the city of Los Angeles on Monday. They require customers to show proof of vaccination to enter many businesses such as restaurants, malls, theaters and salons.

Long Beach and other parts of Los Angeles County are not as strict—only requiring customers to show proof of vaccination at bars and other drinking establishments that do not serve food.

Long Beach has said its city employees must get vaccinated unless they receive an approved exemption, but officials haven’t yet set a deadline, according to Joe Ambrosini, the city’s human resources director.

So far, 77% of the city’s 6,097 employees have shown proof of vaccination, according to data from Ambrosini. Many of the city’s unvaccinated employees are concentrated in the police and fire departments, whose unions have resisted vaccine mandates.

Only 64% of local firefighters and 54% of police officers have shown proof of vaccination.

That’s up slightly from the end of September when city officials announced a vaccine mandate was coming. At that point, those numbers stood at 60% and 51%, respectively. 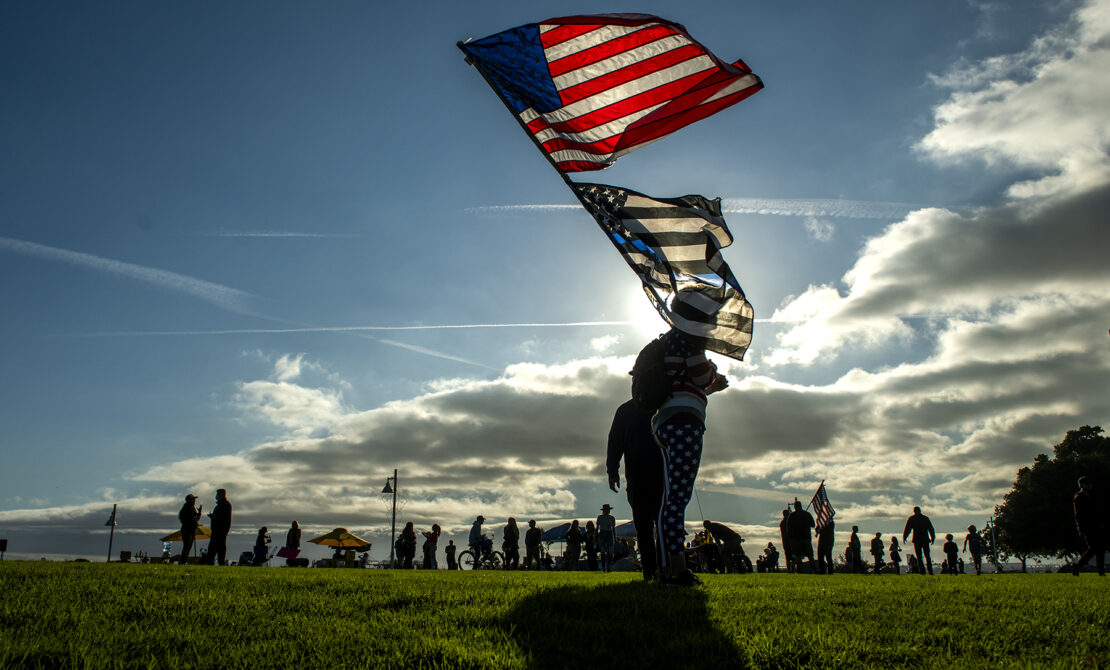 A protester, Julie, stands with over 100 anti-vaccine mandate protesters as they rally at Bluff Park in Long Beach Tuesday, Nov. 9, 2021. Photo by Thomas R. Cordova.