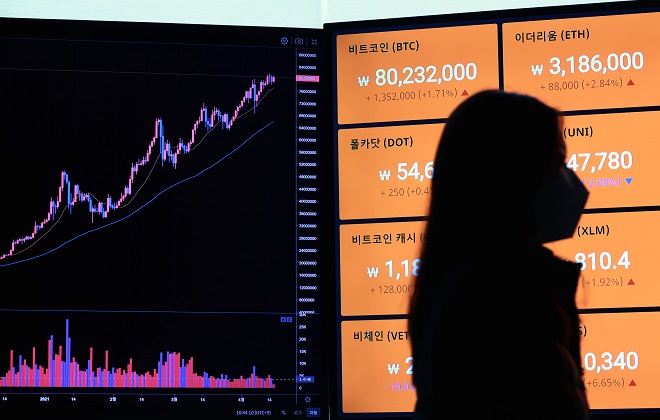 This photo, taken April 16, 2021, shows signboards showing price movements of bitcoin and other virtual currencies on a local exchange. (Yonhap)

The institute conducted a survey of 400 wealthy Koreans with financial assets of more than 1 billion won (US$847,000).

About half of those who said they had no intention to invest in cryptocurrencies noted that such investments have a higher risk of loss.

“The rich, in general, have a preference towards the method of gaining profits by actively operating the assets they hold,” the report said.

“They don’t have an affinity for cryptocurrencies since their risk rate is beyond the range of acceptance and questions remain about the reliability of transactions.”

Among the survey respondents, 60.5 percent selected stocks as an investment option with promising long-term gains.

In the meantime, the largest asset held by the wealthy Koreans was foreign funds (75 percent), with China being selected as the most favored investment region.

The share of those who invest in artworks remained low at 4.8 percent, primarily due to the difficulties in judging their value and managing and storing them after purchase.