European stocks ended in the red on Friday, clocking their first weekly decline in seven weeks on concerns over the economic damage from fresh COVID-19 lockdowns in the region that hammered cyclical sectors such as banks and automakers.

The pan-European STOXX 600 fell 0.33 percent to 486.08 after hovering near record highs earlier in the session. The index ended the week 0.14 percent lower.

It lost ground after news that Austria would become the first country in western Europe to reimpose a full COVID-19 lockdown this autumn to tackle a new wave of infections. 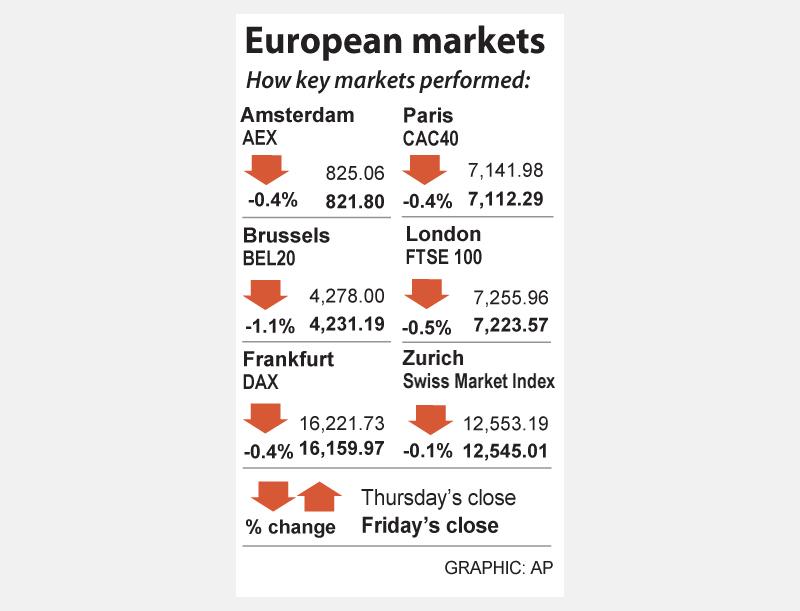 German Minister of Health Jens Spahn said the coronavirus situation in the country was so grave that a lockdown, including for people who have been vaccinated, cannot be ruled out.

“Any thoughts that the vaccines would offer a way to a more normal Christmas period appear to have gone up in smoke for now, in Europe at least, although there is a nagging fear this could ripple out across the region,” CMC Markets chief market analyst Michael Hewson said.

Frankfurt shares fell 0.4 percent, while sectors more exposed to economic cycles such as banks, automakers, and travel and leisure fell 1.5 percent to 2.2 percent.

South European markets, including those in Spain and Italy, fell about 1.5 percent each.

European stocks have hit a series of record highs this month as a stronger-than-expected earnings season helped investors look past concerns about rising inflationary pressures.

European Central Bank (ECB) President Christine Lagarde said inflation in the eurozone would fade so the ECB should not tighten policy as it could choke off the recovery, and hinted at continued bond purchases next year.

The ECB is due to decide on the future of its bond-purchase programs at its Dec. 16 policy meeting.

Lockdown anxiety also overshadowed data showing British retail sales last month rose by more than expected, adding to recent signs that a slowdown in the economy might have abated slightly.

“People are bringing forward purchases they would have made in November and December,” Oanda analyst Craig Erlam said. “We should not get carried away with today’s retail sales figures, because it’s not indicative of a big consumer-driven rebound to come.”

Comments will be moderated. Keep comments relevant to the article. Remarks containing abusive and obscene language, personal attacks of any kind or promotion will be removed and the user banned. Final decision will be at the discretion of the Taipei Times.