Litecoin (LTC) Is Struggling to Get a Bullish Momentum

Litecoin sharks may have the final say on LTC’s direction-…

Exploring Litecoin’s [LTC] position as it looks to…

Litecoin is still undervalued than Bitcoin, though it tripled its value this year. It has an ATH of $412, but experts believe its current market value would be $1500. That is why it is in the news as an alternative to Ethereum and Bitcoin.

The catalyst of increasing the Litecoin value is halving. Two halvings have been done till now. After 840,000 blocks are minded, the Bitcoin miners are rewarded with a halve. It is an inbuilt process of the algorithm and occurs every four years. The next halving is expected in late 2023.

Generally, price starts to grow after halving because fewer miners access the newly mined coins. It is the regulation of the supply to create the scarcity of Litecoin.

Now Litecoin is one of the popular cryptocurrencies with a market cap of over $14 billion. The founder and creator of Litecoin Foundation, Charlie Lee, describes Litecoin as a ‘light version of Bitcoin.’

Due to mass adoption, the usage of Litecoin is increasing day by day. Recently, the Litecoin group tweeted that it is the second most transacted crypto after Bitcoin.

Litecoin use is increasing again! The 2nd most transacted #crypto with @BitPay merchants! #Litecoin ⚡ $LTC + #BitPay 🛒making it easier to #PaywithLitecoin pic.twitter.com/RDmqpbuRdk 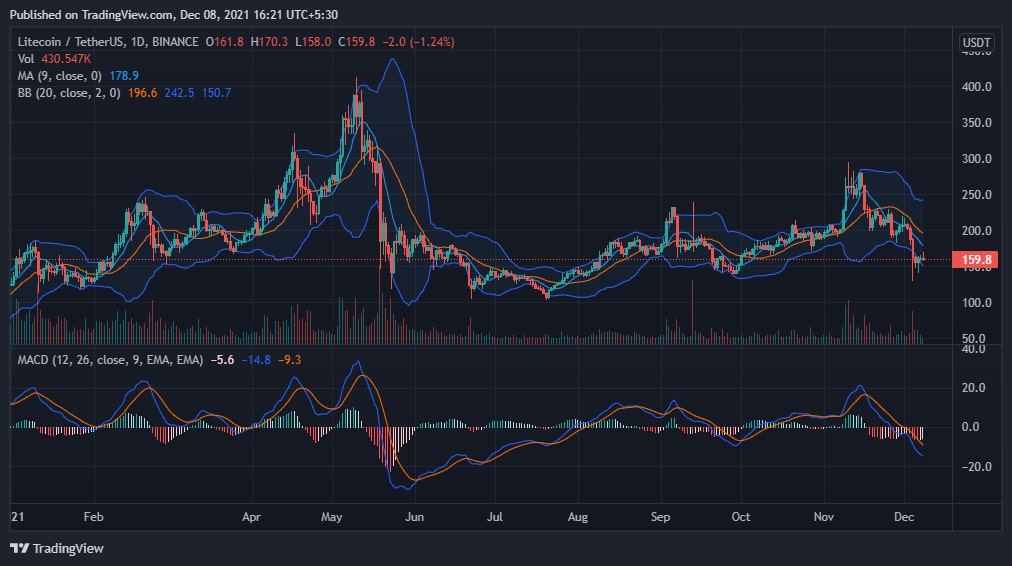 While writing this analysis, the price of Litecoin is $156, which is the support level of LTC. RSI is very weak on the daily chart and reflects a bearish momentum. $202 will be the next resistance level of this coin. Like Bitcoin, it has also broken the trendline on 4th December. As a popular coin, BTC bounced up very quickly, but LTC is still struggling to get a bullish momentum.

In November, it reached a higher level of $280, showing an opportunity for long-term growth. On the daily chart, MACD is bearish; the Moving Average is also going down. The Bollinger Band becomes less volatile. However, the last few candlesticks are in the lower half of BB and far lower than baseline. Still, there is positive news for LTC, but the price chart is not reflecting the same.

Due to various reasons like high liquidity, increased interest rate, and profit booking, the major world indices are down. It can be the reason for LTC’s downfall. Is it the right time to invest? We think it is the right time to invest based on the fundamentals of the LTC network. Besides that, by clicking here, you can have a detailed overview of Litecoin projections for the next few years. Currently, the LTC price is around the support level, so if it gets momentum, it will give you a good return. If you are a long-term investor, you should invest in Litecoin now.


Read More: Litecoin (LTC) Is Struggling to Get a Bullish Momentum