Is Reef (REEF) Worth the Risk Saturday?

This article is excerpted from Tom Yeung’s Moonshot Investor newsletter. To make sure you don’t miss any of Tom’s potential 100x picks, subscribe to his mailing list here.

Cryptos Go to the Moon… By Mistake 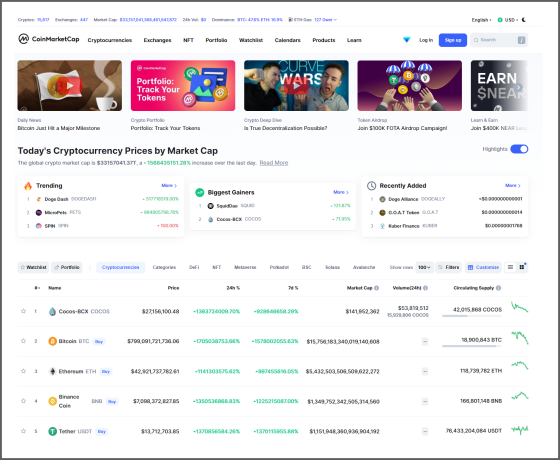 Of course, no one actually got rich. Though pop culture website Uproxx claimed the glitch “made everyone think they were trillionaires for about an hour,” I doubt anyone was bamboozled by the obvious data error.

Tuesday’s wild ride exposed the weaknesses in cryptocurrency pricing. The Bitcoin.org website lists at least two dozen major exchanges, each of which will produce different “market prices” unless they’re linked together. Arbitrageurs like 29-year-old Sam Bankman-Fried have become billionaires by trading between mismatched exchanges. And DeFi platforms only worsen the problem by creating even more prices to track.

That means data providers often use shortcuts. Coinbase (NASDAQ:COIN) suffered a similar glitch to CoinMarketCap, presumably drawing data from the same erroneous pool. Crypto investors should pay attention to how exchanges respond to Tuesday’s snafu; the next data mistake might not be quite so glaring.

Glitches might not make investors rich. But as well-run companies move into the crypto space, they’re giving crypto fans a chance to ride the massive blockchain wave.

Non-crypto companies from Greenidge (NASDAQ:GREE) to Asia Broadband (OTCMKTS:AABB) have been remaking themselves as blockchain plays. Financial data aggregator Thomson Reuters now counts 125 U.S. companies with the term “blockchain” or “crypto” in their description.

In total, these self-described blockchain companies now represent $150 billion in market capitalization, despite earning just $8 billion in revenues and negative profits. If you rolled them all into a single company, the crypto-agglomerate would rival Tesla’s (NASDAQ:TSLA) valuation on a price-to-sales basis despite losing more money just this year than the EV maker has in a decade and a half.

So it’s no surprise that mainstream companies have similarly jumped on board. Last week, AMC Entertainment (NYSE:AMC) announced plans to issue “I Own AMC” NFTs to its Investor Connect members (Interested parties have until Jan. 31 to sign up). And despite another 15% drop in value this week, AMC shares are still worth 8x more than they were a year ago.

As meme stocks continue to woo investors, here are two that are actually worth watching.

Bakkt’s (NYSE:BKKT) sudden price drop from $50 in late October to $12 today has finally made BKKT a stock worth watching.

This crypto trading exchange was started in 2018 by the Intercontinental Exchange (NYSE:ICE), a company you may be familiar with as the operator of the NYSE. Bakkt’s purpose? Holding Bitcoin for large institutional investors.

Ordinarily, that would make the firm roughly as interesting as Bank of New York Mellon (NYSE:BK) or watching paint dry on the side of a Wall Street building.

But Bakkt — under the leadership of the love-her-or-hate-her U.S. Senator Kelly Loeffler and her husband — has begun branching out into consumer-facing crypto services as well. Today, investors can use Bakkt to spend crypto, earn rewards and manage their portfolios. The firm has also moved into business-based crypto services.

Bakkt, however, is still struggling with poor execution. Show me someone who uses their app to trade crypto, and I’ll show you someone who can only buy and sell Bitcoin. But given 1) Bakkt’s guaranteed ICE business and 2) the firm’s outsized crypto ambitions, don’t be surprised if meme investors are willing to overlook its shortcomings and buy BKKT stock in 2022.

Then there’s the company that started it all:

Regular Moonshot readers will know I’ve never wholeheartedly recommended a position in GameStop, one of the most expensive retailers on the stock market today. GME shares are down 50% since June, and its Q3 numbers serve as a reminder that GameStop still sells shiny plastic discs in places called “malls.”

Yet I’ve never stopped rooting for the little guy either.

In February, I outlined how Redditors could help activist investor Ryan Cohen become GameStop’s de-facto leader and send the stock to $500 (Cohen has since become the chairman of the board). The following month, I explained how long-term investors could profit from the turnaround company if things went well: “VR, e-sports, mobile, and cloud gaming are all potential billion-dollar businesses.”

After a long wait, GameStop looks like it’s finally figuring out its crypto and NFT strategy. In November, Ethereum token Loopring (CCC:LRC-USD) soared on news of a potential GameStop partnership. And the videogame retailer has been busy building out its NFT and Web3 Gaming teams.

“The turnaround will take multiple years,” I warned investors in March. And though those words still ring true, GameStop is slowly turning into a stock to watch once again.

As we round into 2022, CRO token will continue to be a player worth watching. The Crypto.com app saw 5 million downloads in November alone and remains in the Top 20 most downloaded apps on the Android App store now.

It hasn’t all been smooth sailing for the token. Prices jumped to $0.97 in the week following the rebranding of Staples Center in Los Angeles (it’s now the Crypto.com Arena). But prices slid after the initial excitement wore off. I cautioned investors at $0.65 to be careful in buying the dip.

CRO has since regained its price footing. Nearly two-thirds of CRO investors on Coinbase are now adding to their positions, and the initial mania (which can often push prices to unsustainable levels) now looks more moderate.

If you’re looking for a reasonably successful token with some meme potential, CRO would make a great pick.

Bottom line: Bakkt is a low-cost option to bet on its crypto fortunes. Crypto.com’s CRO is still a “buy,” while GameStop has become an NFT play to watch.

Solana Continues Its Fall From Grace

Regular Moonshot readers will know I’m happy to jump in and out of positions. After calling Solana (CCC:SOL-USD) an “Ethereum Killer” in May and riding the crypto up 420%, I changed tack in October when prices reached $180.

“With such massive gains under their belts, investors should also consider taking SOL profits off the table,” I wrote. “As Solana continues its ongoing struggle to gain Main Street interest, it’s best to start selling out and buying… BNB, ETH and DOGE.”

Of course, my timing isn’t always perfect. Solana continued to go up for a week afterward to $260.

On Thursday Dec. 9, Solana suffered its second slowdown in transaction processing in three months. A now-deleted tweet from Solana NFT platform Blockasset explained that the event was “due to a DDoS attack flooding the network.”

A successful DDoS (Distributed Denial of Service) attack suggests that Solana has a centralized node that can get attacked in the first place — a big no-no in the DeFi crypto world. It shakes trust in Solana down to its core.

With SOL prices now down to $157 since my “sell” call, investors should continue to wait before jumping back in.

In 1962, songwriters Gerry Goffin and Carole King created a huge earworm, “The Loco-Motion.” The song immediately hit No. 1 in the Billboard charts for its catchy tune. The singer, Eva Boyd, would famously create a dance retroactively to go with the music (almost like an analog TikTok).

Meme stocks have taken song covers to another level. Today, these companies take entire industries under their wing. In November, intimate apparel company Naked Brand Group (NASDAQ:NAKD) agreed to merge with an electric vehicle maker, despite having little in common. Cloud-based software firm Support.com’s marriage with Bitcoin miner Greenidge Generation looks to be on a similar track.

Most of these companies will fail: how many new-media mergers…

Read More: 2 Crypto Stocks To Watch on Meme Coin Madness – And a Crypto to Buy

XRP hidden accumulation by whales could launch it to $1.50

FOMC Crypto Alert: Why Are Cryptos Crashing Ahead of Federal Reserve Meeting Update?

Is Reef (REEF) Worth the Risk Saturday?