Is NEAR Protocol the Next Ethereum?

Mark Cuban Envisions Some Of The Biggest Crypto…

Why Bitcoin [BTC] investors are confused between two poles…

MANA is falling, but investors must know this before they…

The leading cryptocurrencies came of age and existed in relative obscurity for years before climbing to their multibillion-dollar market caps as the wider investing community became aware of them. There may never be a next Bitcoin or Ethereum in terms of total return now that even new cryptocurrencies are much more on the radar of investors from inception. However, due to their ubiquity and entrenched status with users, investors, and developers, I think that Bitcoin and Ethereum will likely remain the two ‘blue-chip’ cryptocurrencies for the foreseeable future.

That said, I believe there is plenty of room for a differentiated cryptocurrency with solid performance metrics, growing adoption, and ample funding to serve as a viable alternative to Ethereum and become a potential third blue-chip crypto. One cryptocurrency that looks like a viable option to achieve this billing is NEAR Protocol (NEAR -3.72%). 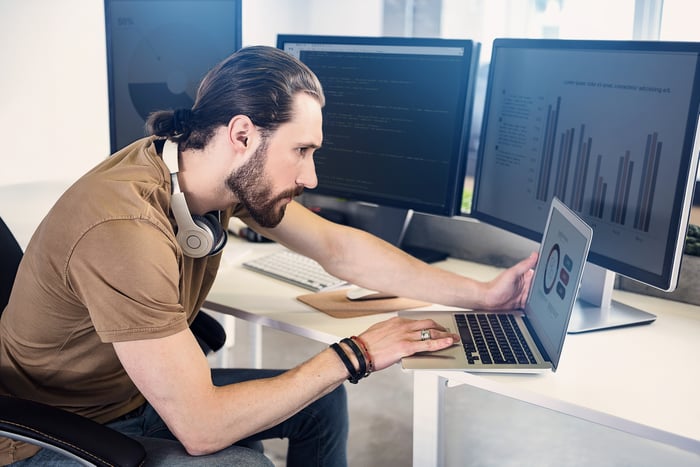 Ethereum and its users are preparing for the biggest change to come to the network in years as they get ready for “The Merge,” in which it will switch from the Proof-of-Work consensus to Proof-of-Stake. The move is meant to address some of the challenges currently facing the cryptocurrency’s users, such as long wait times for transactions and high and unpredictable transaction fees (often called gas fees).

While this move should bolster Ethereum, NEAR already enjoys many of the same benefits. For example, fees on NEAR are under $0.01 per transaction. The settlement time is near-instant in one or two seconds and can reach a throughput of up to 100,000 transactions per second. This speed and cost-efficiency make NEAR a practical option for everyday transactions, both big and small.

Additionally, the transition to proof of stake will make Ethereum a more environmentally friendly blockchain. NEAR is already climate-neutral and has been awarded the Climate Neutral Product Label by carbon-reduction strategist South Pole.

As the blockchain that underpins many other popular cryptocurrencies and the place where NFTs (non-fungible tokens) started, Ethereum is far ahead of NEAR Protocol in terms of adoption. Ethereum’s genesis block was in 2015, whereas NEAR launched in 2020, so Ethereum also has a five-year head start over NEAR. In July, Ethereum reached the milestone of 200 million unique addresses worldwide. Ethereum is being used for about one million transactions per day as of July.

NEAR has a long way to go before it begins to approach Ethereum in terms of widespread usage, but that being said, NEAR is no slouch in terms of adoption. There are over 16 million unique accounts on NEAR, although it must be pointed out that only a fraction of these is active on a daily or weekly basis. In July, the NEAR network has been used for 300,000 to 400,000 transactions per day so far.

While nowhere near the size or prominence of Ethereum NFTs, which have achieved price tags in the hundreds of thousands of dollars and entered into pop culture, NEAR has multiple NFT marketplaces. The NEAR universe also includes exchanges, lending protocols, and even its own answer to Solana’s (SOL -2.93%) popular StepN move-to-earn app called Sweatcoin. NEAR is even working with actress Mila Kunis and director Sharad Devarajan on a project called Armored Kingdoms which will include comics, film, and a Web 3.0-based trading card game.

Is NEAR the next Ethereum?

Many cryptocurrencies may not survive the current crypto winter, and they need to differentiate themselves in order to do so. NEAR is differentiated with its user-friendly and developer-friendly approach, which includes human-readable account IDs and enables developers to build on NEAR using popular languages like Rust and Assembly. Furthermore, NEAR has the funding to survive any prolonged crypto winter — it raised a combined $500 million from venture capitalists in funding rounds this past January and April. Last October, NEAR also announced an $800 million ecosystem fund meant to encourage development on its platform.

Is NEAR the next Ethereum? It’s hard to say if there will ever be a “next Ethereum” given how much the crypto landscape has changed over the years. But NEAR does not necessarily need to become the next Ethereum to become successful or to be a good long-term investment. With its growing adoption, massive throughput, minimal transaction fees, and fast transaction times, I think that NEAR is making a strong case to carve out a lane for itself as a viable alternative to Ethereum and to eventually become a blue-chip cryptocurrency itself. I believe that both Ethereum and NEAR are here to stay for the long run and that both will play a prominent role as cryptocurrency continues to develop.


Read More: Is NEAR Protocol the Next Ethereum?

Mark Cuban Envisions Some Of The Biggest Crypto Opportunities Ahead

MANA is falling, but investors must know this before they consider getting out

Do you have to pay tax on token airdrops?