MATIC has had a roller-coaster of a ride on the price charts lately. Where is it now? And, where is heading?

The crypto-winter saw MATIC tank all the way down to $0.324 on 19 June 2022, its lowest in over a year. However, the price has since recovered and gained by more than 190% on the charts. So does this reversal signal a bull run or is it a dead-cat bounce waiting to fleece unknowing investors?

In this article we will take a look at events that have influenced MATIC’s price and the ones that will affect its future so that investors can make an informed decision. 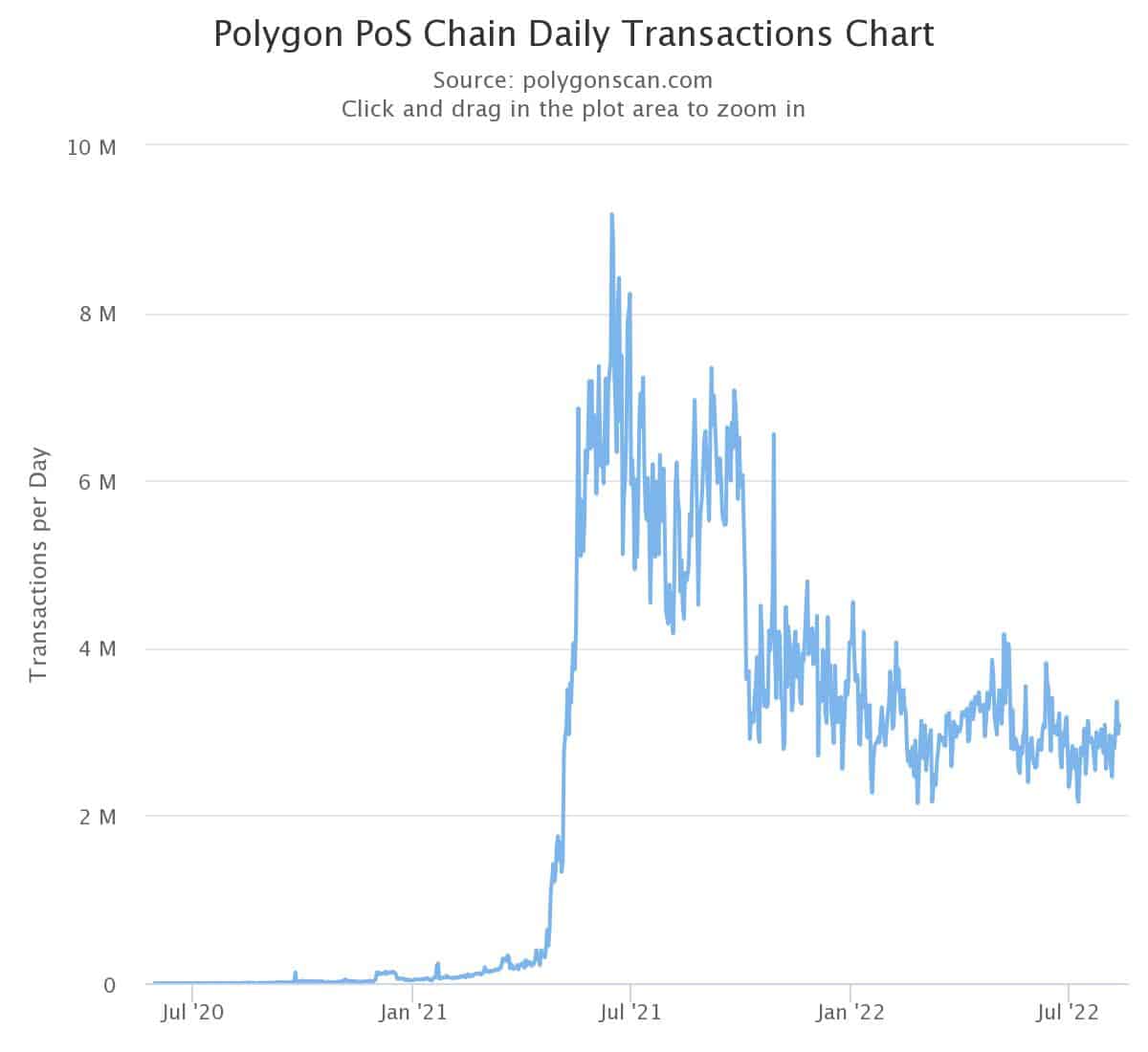 At the time of writing, MATIC was trading at $0.786. The market capitalization stood at $5.84 billion with $520.6 million traded over the last 24 hours. With over 142 million unique user addresses and $5 billion in assets secured, Polygon PoS has processed more than 1.6 billion transactions till date.

In 2017, Sandeep Nailwal and his team set out to build a platform on Ethereum’s blockchain, one that would solve problems like network congestion, high fees and low transaction throughput. All this, without compromising on features like security and the dynamic ecosystem that Ethereum offers. This led to the launch of the Matic Network.

In February 2021, Matic rebranded to Polygon in a bid to provide a scalable version of Ethereum’s infrastructure and introduce overlay-rollups to combine other layer 2 platforms for instant transactions, among other things. Polygon retained the name of its native token MATIC. The token proceeded to gain by over 200% over the next 30 days. Polygon runs on the proof-of-stake consensus protocol and can be described as an Ethereum layer 2 scaling solution with the best of both worlds.

In 2021, MATIC’s price went soaring thanks to the increasing popularity of Ethereum and surging activity in NFTs and play-to-earn games like Axie Infinity. MATIC began the year at a humble $0.018 and market cap of $81 million. By the end of the year, MATIC’s market cap hit a whopping $20 billion, with the altcoin touching its all-time high of $2.92 on 27 December.

In May 2021, Polygon was in the news after it received backing from billionaire investor Mark Cuban, who revealed plans to integrate his NFT platform Lazy.com with Polygon. Following his investment in Polygon, Cuban claimed that the Polygon Network was “destroying everybody else” at the Defi Summit Virtual Conference in June 2021.

Since the beginning of 2022, Polygon has secured various partnerships, most notably with Adobe’s Behance, Draftkings and billionaire hedge fund manager Alan Howard for development of Web3 projects. Polygon boasts partnerships across various industries. Instagram and Polygon have collaborated on NFTs too.

Based on gathered adoption metrics, Alchemy has described Polygon to be the best-positioned protocol to drive the booming Web3 ecosystem. Data from Alchemy also showed that at press time, Polygon hosted more than 19,000 decentralized applications (dApps) on its network.

On 27 May 2022, Tether (USDT) , the largest stablecoin by market capitalization, announced that it was launching on the Polygon Network. MATIC rose by more than 10% following news of the launch.

Citigroup released a report in April 2022, one in which it described Polygon as the AWS of Web3. The report went on to claim that the Metaverse economy is estimated to be worth a whopping $13 trillion by 2030, with most of it being developed on the Polygon Network. Citigroup also believes that Polygon will see widespread adoption thanks to its low transaction fees and developer friendly ecosystem.

The Terra network’s collapse in May 2022 triggered an exodus of developers and projects. Polygon soon announced a multi-million dollar Terra Developers Fund in a bid to help migration of anyone looking to switch networks. On 8 July, Polygon Studios CEO Ryan Wyatt tweeted that over 48 Terra projects had migrated to Polygon.

Crypto exchange Coinbase published a report on 8 August 2022 which claimed that the future of Layer 2 scaling solutions could very well be a zero-sum game, hinting that layer 2 solutions like Polygon could overtake Ethereum in terms of economic activity.

On 8 August 2022, blockchain security form PeckShield reported a rugpull by Polygon based play-to-earn game Dragoma, following a sharp decline in the value of its native token DMA. The same has been corroborated by data from Polygonscan which shows a clear surge in token transfers and transfer amount on the day of the alleged rugpull which led to a loss of over $1 million.

In the week following Polygon’s announcement of the Gnosis bridge, MATIC surged more than 18% breaking the crucial resistance at $1 for a brief period. This feature paves the way for Web3 teams like DeFi protocols and DAOs to transfer assets between Ethereum and Polygon, for considerably less gas fees without compromising on security.

Numbers from the 32nd edition of PolygonInsights, a weekly report published by Polygon outlining key network metrics, indicated that in spite of dropping down from the $1 mark that MATIC had reclaimed barely a week before, not all was lost. Weekly NFT volume stood at $902 million, a whopping 800% increase from the previous week. Meanwhile Active wallets grew by 75% to 280,000.

In an industry that is often bashed for being energy intensive and harmful for the environment, Polygon has distinguished itself by achieving network carbon neutrality after offloading $400,000 in carbon credits. This nullified the carbon debt accrued by the network. As per the ‘Green Manifesto’ published by Polygon, they now plan to achieve the status of being carbon-negative by the end of 2022. In fact, they have pledged $20 million towards that milestone.

Cercle X, the world’s first decentralized application for waste management solutions, announced on 15 August that it had integrated with Polygon to leverage Web3 to digitize the garbage disposal process by developing a waste management dashboard.

Polygon has a maximum total supply of 10 billion tokens, out of which 8 billion are currently in circulation. The remaining 2 billion tokens will be unlocked periodically over the next four years and will primarily be disbursed through staking rewards. The initial exchange offering was held on Binance through the Binance Launch Pad to facilitate the sale of 19% of the tokens. 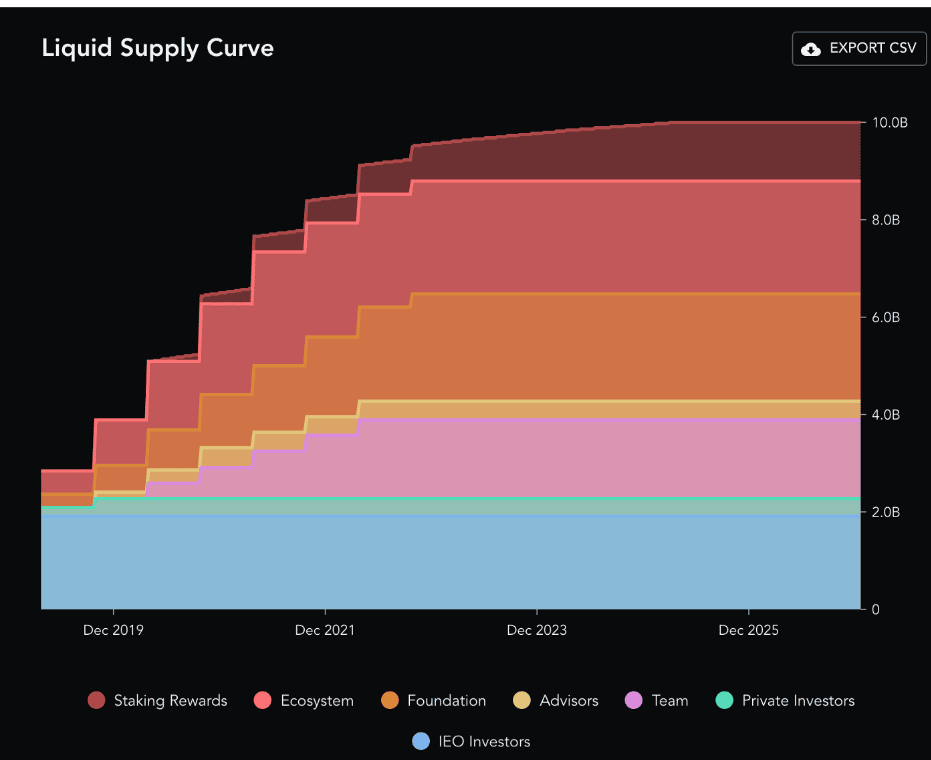 Following is the breakdown of the current supply –

Understandably, there are many who are very bullish on MATIC’s future. Some YouTubers, for instance, believe MATIC will soon be worth $10 on the charts. In fact, he claimed that a “glorious” double-digit valuation for the token is inevitable.

“We’ve seen Polygon really picking up in the number of NFTs sold. We can see from July, when we had 50,000 Polygon-based NFTs sold, to now where we have… 1.99 million NFTs sold in the month of December on Polygon on OpenSea. That’s absolutely massive, massive growth for the Polygon ecosystem.”

After analyzing the altcoin’s price action, crypto-experts at Changelly concluded that MATIC should be worth at least $3.39 in 2025. They forecasted a maximum price of $3.97 for that year.

Here, it’s worth pointing out that 2030 is still a long way away. 8 years down the line, the crypto-market could be affected by a host of different events and updates, each of which is difficult to ascertain. Ergo, it’s best that predictions like these are taken with a pinch of salt.

On the bright side, however, MATIC’s technicals flashed a BUY signal at the time of writing. It is no wonder then that most are optimistic about the fortunes of the altcoin.

MATIC’s recovery since the market-wide sell-off in May has been impressive, but it is possible that the trend reverses if investors choose to book their profits. Especially given that a lot of them have seen their holdings diminish…