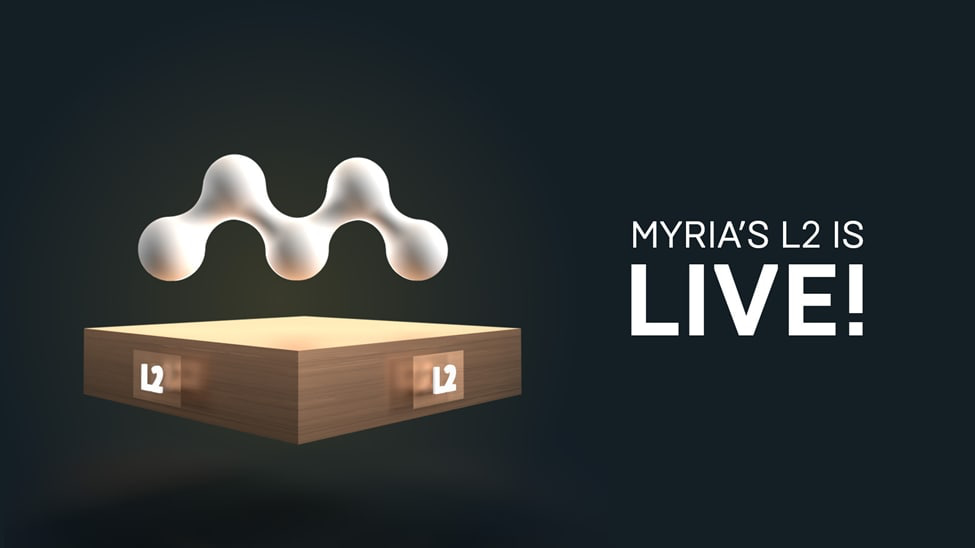 Notably, the launch of Myria L2 includes a comprehensive suite of developer and gamer-centered products, including the Myria Developer SDK, the Myria Wallet, and the NFT marketplace. In particular, these tools make it possible for users and producers to use the scalability advantages offered by the protocol, according to a Myria press release shared with Finbold.

Myria’s L2 uses a mechanism called Zero-Knowledge Rollup (ZK-Rollup) to combine a large number of separate transfers into a single transaction. This allows it to process up to 9,000 transactions per section (TPS), which is a significant increase over Ethereum’s rate of fewer than 50 TPS.

Moreover, users of blockchain gaming and NFTs can establish their own Myria wallets with “one click,” mint, trade, and transfer NFTs instantly with zero gas fees and 100% carbon neutral.

“We are incredibly fortunate to have such a strong community eager to join the Myria L2. With this launch, the team is very thrilled to see our vision finally come to life.” said Brendan Duhamel, co-founder of Myria.

The Myria Developer Solution adopts an API-first strategy, simplifying intricate blockchain interactions using Myria’s collection of REST APIs and software development kits (SDKs). This makes it possible for a developer to build any NFT product, such as a blockchain game, in a couple of hours without the need to learn blockchain coding languages such as solidity.

“We are incredibly excited to bring the industry this next step forward with what we’ve built. We see massive potential in the underlying technology we have built to support NFT scalability and we believe blockchain gaming will be the next big vertical for NFTs. This is why we have created NFT solutions purpose built to serve game developers and game builders. We’re just getting started!”

Over 1 million verified users on Myria

Furthermore, the platform currently, with over 1.2 million verified registered users, has over 100 projects that are powered by Myria already before the introduction of its L2. This was accomplished by offering the value of its L2 via a frictionless blockchain development experience.

Finally, it’s worth mentioning that Myria’s team continues to grow with over 150 employees who are stalwarts of the gaming and blockchain industries, having previously worked for companies like as Ubisoft, EA, Riot Games, Blizzard Activision, Tencent, Chainlink (LINK), and BitMex, amongst others.

Crypto.com Sues User After Refunding $10M Instead of $100