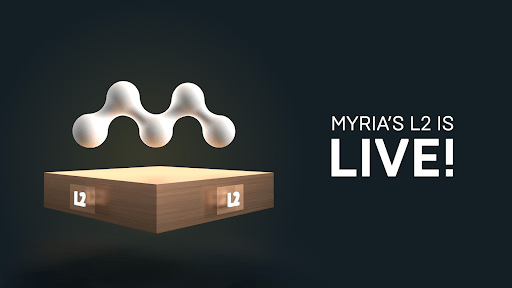 On Tuesday, August 30, gaming platform Myria unveiled its much-awaited Ethereum layer-2 (L2) scaling solution with a focus on blockchain gaming. The goal is to facilitate instant and secure trades for NFTs and blockchain gaming at zero transaction costs.

The Myria L2 will feature an entire suite of developer and gamer-focused products. This includes Myria Wallet, Myria Developer SDK, and the NFT marketplace. Myria’s L2 will use the very popular Zero-Knowledge Rollup (ZK-Rollup) technology.

This technology can facilitate more than 9000 transactions per second (TPS) by bundling a large number of transactions into a single transaction. This is manifold times in comparison to only 50 transactions per second on the Ethereum blockchain network. Thus, the launch of the Myria L2 solution will allow both the creators and users to unlock the scalability benefits of the protocol. Speaking of the development, Brendan Duhamel, the co-founder of Myria, said:

We are incredibly excited to bring the industry this next step forward with what we’ve built. We see massive potential in the underlying technology we have built to support NFT scalability and we believe blockchain gaming will be the next big vertical for NFTs. This is why we have created NFT solutions purpose built to serve game developers and game builders. We’re just getting started!

Myria has more than 150 employees working for it including veterans from the blockchain and gaming industry from companies such as Ubisoft, EA, Riot Games, Blizzard Activision, Tencent, Chainlink, BitMex, and more.

Here’s what Myria L2 has to offer

Myria says that users of blockchain gaming and NFTs will be able to create their Myria wallet with “one-click” and mint. Besides, they will be able to trade and transfer their NFTs with zero gas fee. Myria co-founder Duhamel said: “We are incredibly fortunate to have such a strong community eager to join the Myria L2. With this launch, the team is very thrilled to see our vision finally come to life”.

The Myria platform currently has more than 1.2 million verified registered users. On the other hand, the developer solution offered by Myria takes an API-first approach. It simplifies complex blockchain interactions using Myria’s set of REST APIs and SDKs.

Using this solution, developers can launch any NFT projects and blockchain games in a matter of a few hours without needing to learn any blockchain coding languages. Myria says that the L2 launch will help them deliver a successful blockchain-building experience with ease.

The gaming platform is also forming some key partnerships in the market. Myria recently partnered with Leapblock Studios for creating Moonville farms. This is a play-to-earn NFT game that will launch on Myria’s L2 scaling solution in the coming weeks.