Bitcoin maximalist Saylor getting sued for tax fraud, volatility expected ahead of

January was bitcoin’s best month since 2021, but…

Bitcoin Masterclass Session 4 with Craig Wright: How to…

The biggest news in the cryptoverse for Aug. 31 includes  US Congress asking 5 crypto exchanges to explain how they are combatting crypto fraud, Michael Saylor getting sued for tax fraud in Washington, and Christopher Hamilton being extradited to the U.S. for trial on OneCoin Scam.

In its effort to bring clearer regulation to the crypto industry, the U.S. Congress has issued a letter to Coinbase, FTX, Binance.US, Kraken, and KuCoin to detail efforts they have taken to identify and combat crypto fraud.

Inflation figures in the Eurozone for August spiked to a record high of 9.1%, according to data from Europe’s statistics office. Consequently, the European Central Bank (ECB) is expected to aggressively hike interest rates on September 8.

The crypto market, however, did not react much to the news. As of press time, Bitcoin went up 0.1%, while Ethereum rose 0.25%

Bitcoin mining difficulty rises by over 9%, highest since January

Glassnode data analyzed by CryptoSlate shows that the Bitcoin (BTC) mining difficulty has spiked by 9.26%. the highest since January 2022. The data suggests that more miners are joining the network.

Further analysis of the Bitcoin average hash rate shows an increase up to 224.7EH/s (exahashes per second) on Aug.30 as against 197.7 EH/s observed on Aug. 16.

Combining the data points, market players noted that the spike in Bitcoin mining difficulty and hash rate is a result of more miners returning to work after surviving the crackdown across Europe and North America.

A recent HIP 70 proposal to the community revealed that Helium developers are inching to migrate to the Solana network s as to improve the network’s efficiency.

The developers claimed that the migration will open up access to Solana developer tools and features which will help Helium address its data flow and accounting issues.

Michael Saylor, MicroStrategy getting sued for tax fraud in Washington

Bitcoin Maxi Michael Saylor and his company MicroStategy will face a lawsuit for allegedly evading tax payments in Washington.

The case against him claimed that Saylor who had lived in Washington for over a decade conspired with his company to help him evade taxes.

A Briton Christopher Hamilton who was indicted in the $4 billion OneCoin Scam of 2014, will be extradited to the U.S. following a court ruling in the U.K.

The accused had earlier filed to evade trial in the U.S., but District Judge Nicholas Rimmer in his ruling stated that Hamilton has to be tried in the U.S. where his victims are based.

On-chain datasets analyzed by CryptoSlate indicate that the Ethereum merge may come with high volatility.

Using the Estimated Leverage Ratios (ELS) according to Glassnode, we observed that the volume of leverage reached an all-time high of 0.28, indicating the potential for high volatility should a large price swing result from the Merge. 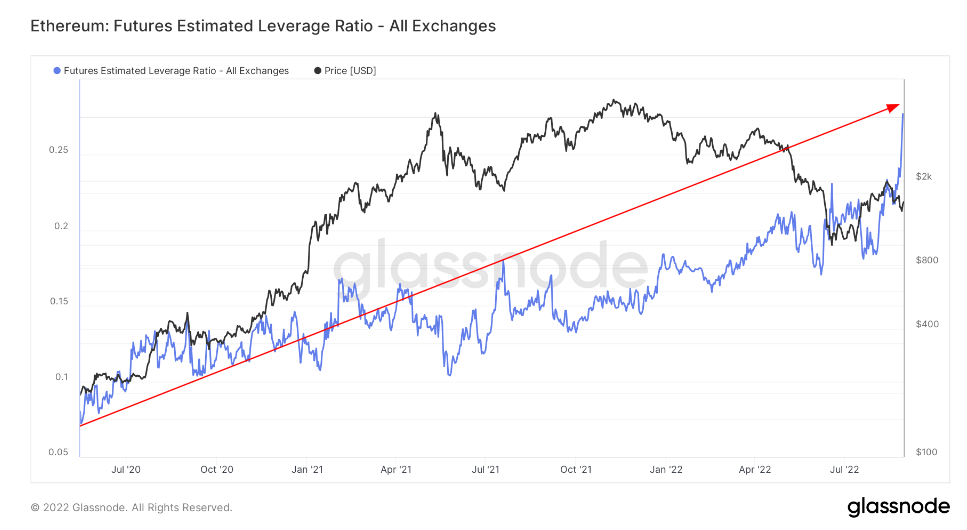 Funding rates have been highly negative since the start of August, implying that more short positions are in play.

Despite market downturn, US sees 44% increase in retail crypto investors

A survey by Bitstamp revealed that the interest and trust of Americans have increased significantly, despite the unfavorable market conditions.

61% of U.S.based respondents made their first investment in Q2 2022 indicating a 44% rise in interest from new investors in Q1.

The respondents indicated high confidence in cryptocurrencies as the trust rating rose from 61% in Q1 to 73% in Q2 2022.

South Korea’s Busan city has signed a memorandum of understanding (MoU) with FTX to provide technical and infrastructure assistance as the city works to build its local crypto exchange.

FTX also hinted at launching its Korea office in Busan to help drive adoption in the city which was designated as Asia’s blockchain-regulatory-free zone.

Ticketmaster announced today that it will continue issuing NFT tickets that are minted on the Flow blockchain by Dapper Labs. The formal partnership is coming six months after the ticket platform minted over 5 million NFTs with Flow.

Users will be able to connect with their wallet to access Ticketmaster’s marketplace where they can easily view and trade NFTs tickets.

The study also indicates that APG miners are still profitable despite the declining market conditions. On average, the miners earn approximately $6.6 million, which is projected to amount to $79 million in the next year.

Crypto Lawyer Kyle Roche Pulls Out of Lawsuits Against Tether, Binance and Others

January was bitcoin’s best month since 2021, but crypto isn’t ready for a…

Bitcoin (BTC) has a Bearish Sentiment Score, is Falling, and Underperforming the…

Here’s What Will Be Important