John Reed Stark helped launch the SEC’s Office of Internet Enforcement in 1998, at the height of the dot-com boom.

Under Stark, the office’s founding chief, the team had the task of clamping down on securities fraud committed through the nascent but rapidly expanding web. The job was to go after the bad guys with the same technology they were using — technology that Stark found fascinating.

“I was an internet evangelist,” he told Protocol. “I was out there talking about how incredible the internet was and how infinite the possibilities were.”

More than 20 years later, Stark is speaking out against what he considers a new wave of fraud. But this time he’s also taking aim at the technology that he says the scammers are using: cryptocurrencies and blockchain.

“There’s so many reasons to be skeptical of cryptocurrency,” Stark said. “I just feel like it’s really shameless.”

Stark has emerged as one of the most outspoken critics of crypto and is a leading figure in the movement pushing for a more critical view of the industry and the trend.

This loose network includes leading technologists, academics, journalists and activists. One of them is the prominent software engineer Stephen Diehl, who was among the technology experts who in June sent a letter to U.S. congressional leaders urging them to resist the crypto hype.

On Monday, Stark will join the first major conference of this network of crypto critics, including Rep. Brad Sherman, chair of the House Financial Services Subcommittee on Investor Protection, and Alex Sobel, a member of the British Parliament.

In an interview with Protocol, Stark discussed what the network of crypto detractors hope to accomplish and why he decided to battle the blockchain.

This interview has been edited for clarity and brevity.

How did the idea for this conference of crypto critics come up?

Stephen [Diehl] started working on that letter with a group of other extraordinary technologists. Once the letter came out, there was such momentum because the skepticism surrounding cryptocurrency, DeFi, NFTs and all that other Web3 nonsense is extraordinarily multifaceted.

There are so many aspects to it, whether you’re talking about bitcoin and the greater fool theory, or the externalities of ransomware and drug dealing and human sex trafficking, or the financial systemic risk created by cryptocurrency or the real bluster, hype and nonsensical belief in blockchain. There’s so many reasons to be skeptical of cryptocurrency.

There are critics who worry about the way the crypto industry is evolving, but they don’t totally reject blockchain technology. I get a sense that this movement totally rejects these technologies.

Yes, yes, yes. It’s a broad way of putting it. That’s fine by me because blockchain is the fundamental aspect of all this. And as the technologists explained in the letter, this is not the solution. [Blockchain technology] generally makes things worse. It doesn’t scale. It has all sorts of problems associated with it.

There was a Wendy’s commercial when I was growing up [which asked], “Where’s the beef?” I was chief of the Office of Internet Enforcement for 11 years. Almost my entire tenure at the SEC, which was almost 20 years, was spent in the juxtaposition of law, business and technology.

I was an internet evangelist. I was out there talking about how incredible the internet was and how infinite the possibilities were. I actually helped install the very first internet terminal at the SEC headquarters. It was this incredible technology.

“The crypto crime wave is taking the world by storm.”

Fast-forward to today. [I asked] one of these crypto enthusiasts, “OK, tell me what, what are the benefits here?” It’s just so incredibly aspirational, or it’s just a marketing ploy so that an IT person can get a little more funding. It’s not this panacea that people make it out to be.

On top of that, the ramifications of blockchain technology being used in cryptocurrencies, in NFTs, for decentralized finance — all of these things have wreaked havoc, not just in terms of ransomware, human sex trafficking, drug dealing. The crypto crime wave is taking the world by storm. Then there are the environmental issues associated with cryptocurrency mining.

What do you say to those who argue that crypto is similar to the web, which also encountered a lot of skepticism but eventually evolved and thrived?

They just throw out anything. They say it’s about financial inclusion, which is the worst of all — that it’s going to solve the problem of the unbanked. That’s how they loop people in. So what I say to them is, “Tell me a use.” Don’t tell me this is here to stay, just because a lot of criminals have begun using it and a lot of venture capitalists have gotten rich investing in it. Tell me why it’s worth it. 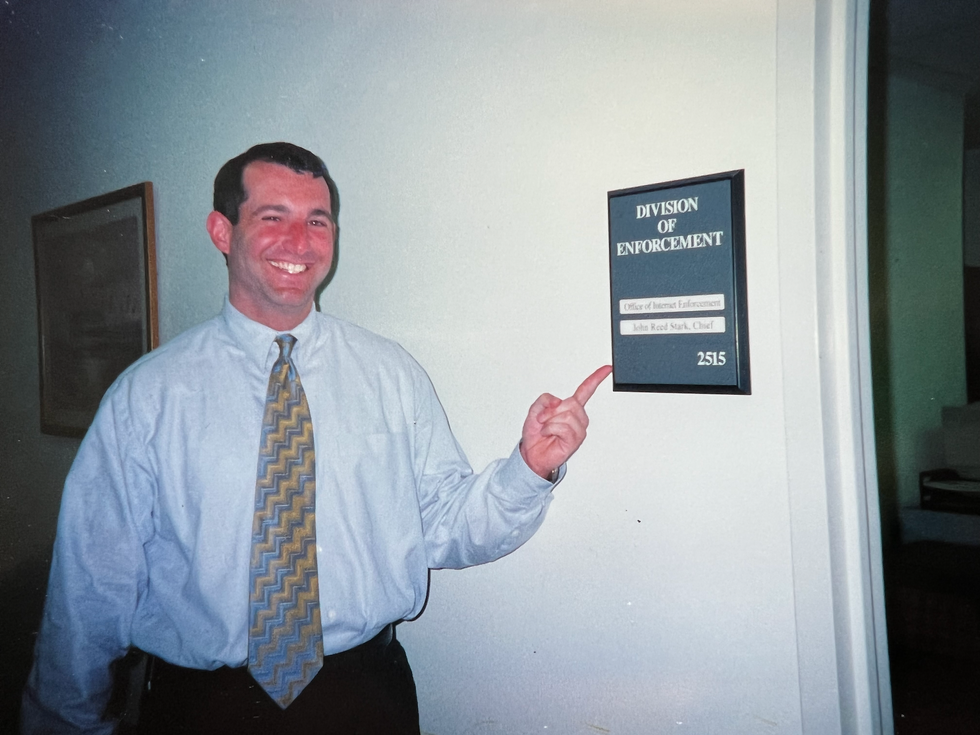 It doesn’t work as a currency. Is there anybody who uses it? Of course not. It’s way too volatile. What retailer would want to take it one day, and the next day have it be worth a third of what it was worth? It makes no sense.

And the idea that it’s decentralized is a complete fraud. There’s miners. There’s digital wallets. There’s the platforms, the exchanges. There’s so many intermediaries. There’s just more and more every time you read about it.

Seven or eight years ago, I was willing to entertain the thought that this might be something someday. But I’m just done with that. Because there came a point in my research, my writing and my experience, where I just felt like it’s really shameless.

Gary Gensler is considered a leading critic of crypto. But I’ve never heard him denounce blockchain as a scam. In fact, in his 2018 MIT lectures, he comes across as being open to the potential innovation from crypto and blockchain technology.

I completely appreciate Chair Gensler’s position. If you go back to my original writings in 2017, 2018 and even 2020, I would usually end by saying blockchain might have the most incredible potential.

I’m not a technologist, although I’ve been around technology my entire life. I’m not an engineer. So I was very careful.

“It doesn’t work as a currency. Is there anybody who uses it? Of course not. It’s way too volatile.”

Then I started to read more and more technologists and talked to more and more of them. I started gathering data, gathering information sources, watching lectures, reading everything I could on it. I came out one day a couple years ago and said, “You know what, blockchain is bunk.”

I stand behind that, not as someone who makes that conclusion somewhat reflexively or without a lot of study. Gensler was exactly where I was, at the same time that he was teaching. I think I would have said the same thing.

But you know, it’s not the early days. It shouldn’t be hard for anyone to explain to me the benefits.

There are crypto industry leaders who acknowledge the need for regulation and who are even taking steps to set up structures and systems for compliance requirements like KYC. What do you think of these moves?

I think, first of all, the industry is crumbling. You can view it with optimism because all of these venture capitalists are pouring money into it. It’s a magical money machine. Slap the label Web3 on anything and what do you get? An exponential enterprise valuation.

Look at the NFT market. Initially, I was kind of like, “You want to buy some silly-looking electronic cartoon with a link to a JPEG file and you want to pay a lot of money for it and help somebody else reap more money? Go ahead.”

People want to be ridiculous with their money, let them do it. But as you look into it, it became such an incredible industry, filled with so much fraud and chicanery. None of it made any sense to me. It looked like a big money-laundering machine.

Suddenly, to me, there was a lot of harm in this stuff, and the celebrities touting it, to me, seem so incredibly appalling, so shameless, that you would exploit your own fans so that you can pocket a few extra million. The conflicts of interests were so incredible.

People talk about, “We need a new regulatory framework.” I don’t see it. I see the existing regulatory framework. They keep saying how wonderful everything is going [but] we need regulatory clarity. We just want to do this right. There’s no transparency, at all, into any of these entities. And you cannot have a financial system without that kind of transparency. It’s just not safe.

I’m not a big regulations guy. But when it comes to finance, it’s just not an area where you can let people run free.

You argue that the industry is crumbling. But it’s hard to imagine crypto and blockchain disappearing.

You know, that’s a very good point. Like, what are we gonna do with this industry? It’s here to stay. All I can tell…

Can It Happen? How? And What It Might Mean for Crypto?