The European Securities & Markets Authority (ESMA) has warned about the risks of increasing consumer rip-offs and operational failures as cryptocurrency adoption grows over time.

In its ‘Crypto-assets and their risks for financial stability’ report published today, the ESMA stated that future crypto-crashes could affect conventional financial markets as investments in crypto-assets grow.

Even at its peak, crypto-capitalization remained at only 1 % of the combined capitalization of global equity and bond markets. However, crypto-adoption has been growing with time. In fact, the New York Stock Exchange and Binance recorded total annual spot trading volumes of €35 trillion and €8 trillion respectively, until July 2022. 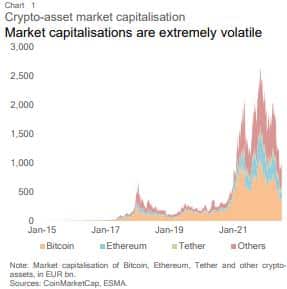 Crypto-assets carry a number of risks because of their volatile price movements. As long as applicable regulatory measures do not apply, these risks may, one day, affect the stability of the traditional financial system also.

There are a number of crypto-specific risks also. The anonymity of the crypto-market makes it nigh impossible to assess the creditworthiness or aggregate exposures of participants. In addition, attacks on Distributed Ledger Technologies (DLTs) can expose entire blockchains to risks. Since 2012, there have been 33 known attempts to attack consensus protocols, according to Makarov and Schoar.

The report also noted that there is a significant risk that crypto-markets could influence the pattern of traditional financial markets such as price manipulation and mis-selling. Huobi Global, Bitmex and Bybit are some of those crypto-exchanges that allow risky investments via leverage of over 100 times. 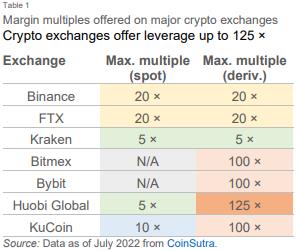 Other emerging risks such as manipulation of consensus mechanisms, large pseudonymous orders distorting prices, hacks, and congestion also remain to be addressed.

As of now, there isn’t much penetration of the crypto-industry into the traditional financial system. However, as it grows, there is bound to be repercussions on the latter. Citing the example of Elon Musk’s Tesla first accepting and then disallowing payments in Bitcoins, the impact of this decision on crypto-prices has also been noted.

One prominent example is the scenario in which entities concurrently hold assets in one system and liabilities in the other, and (directly or indirectly) use the assets as collateral for the liabilities. This would create a direct link between systems. Such transitional operations can lead to direct crypto-asset exposure.

The paper finally noted that the European Union is the first major jurisdiction in the world to provide a comprehensive and dedicated regulatory framework for crypto-assets – the EU Markets in Crypto-Asset Regulation (MiCA).

As per MiCA, which is anticipated to take effect in 2024, ESMA will be given new authority to impose additional regulations on crypto-assets that seem to function like the traditional financial instruments.

Besides, it will also be able to keep an eye on the biggest crypto-service providers with more than 15 million customers.

Short Relief Bounce For Altcoins? If Crypto Marketcap Can Do This