Crypto enthusiasts and analysts believe this is not the end of the XRP price rally, especially now that Ripple is inching closer to a win against the Securities and Exchange Commission (SEC).

What are the odds for a Ripple win against the SEC in court?

The world is watching as Ripple nears the tail end of its battle in court against the United States SEC. Interestingly, most crypto ecosystems are throwing their support behind the blockchain company.

Most of the filed briefs focus on how the regulator has been unjust to Ripple as well as the damage a ruling favoring the SEC could affect other digital currencies.

“For those of you keeping count, 12 (!) amici briefs submitted. It’s unprecedented (I’m told) to have this happen at this stage. They each explain – in their own unique way – the irreparable harm the SEC will do to every facet of the US crypto economy if it gets its way,” Garlinghouse elucidated.

Meanwhile, investors and other market participants are waiting for a summary judgment that might come out on November 15. According to attorney Jeremy Hogan, the next steps in the Ripple vs. SEC lawsuit will be more than just about who wins or loses. The judge could rule on some sections of the case while the rest pushed to trial.

With XRP price trading at $0.49 at the time of writing, many expect a breakout to $1.00 before the end of 2022. A win for Ripple could see XRP relisted on exchanges like Coinbase, further exposing it to a wider audience.

Assessing the potential of the bullish outlook in XRP price

XRP price presents a vivid bullish outlook despite a minor retracement from$0.50. It is sitting on top of the Ichimoku cloud indicator, suggesting that the path with the least resistance is to the upside. 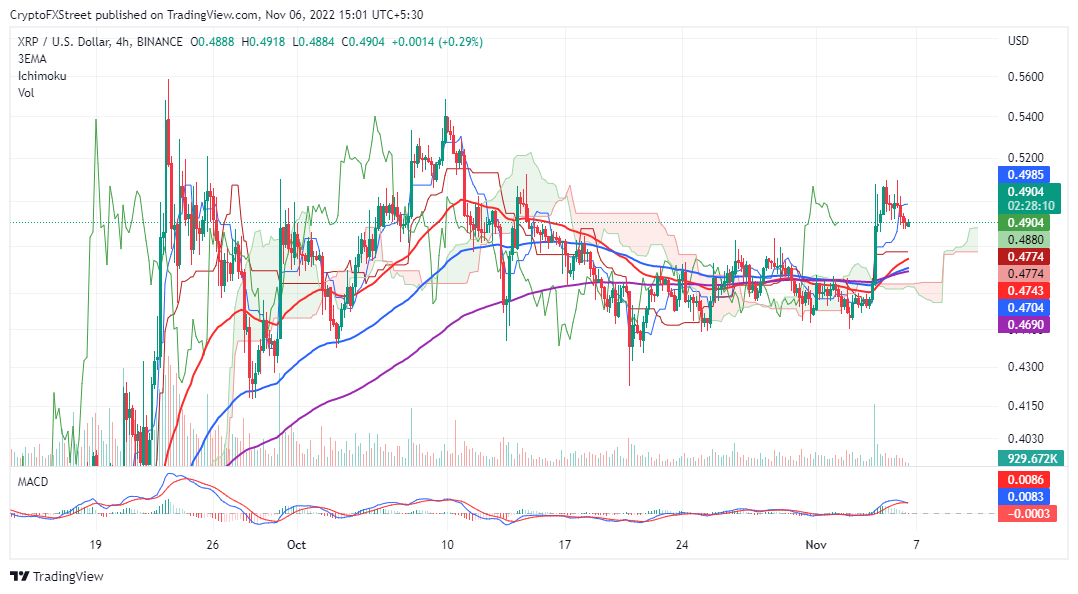 Furthermore, XRP price holds above all the applied moving averages, including the 50-day Exponential Moving Average (EMA) (in red), the 100-day EMA (in blue) and the 200-day EMA (in purple).

Traders must be cautious when looking for short-term long positions in XRP price, especially now that the Moving Average Convergence Divergence (MACD) is about to validate a sell signal. A four-hour to a daily candlestick close below $0.50 could turn short positions profitable with potential exit targets at $0.47 and $0.46, respectively.

Watch Out for Cryptos Including Solana, Helium and Litecoin By CoinEdition

Time to lock in the gains as ETC price retreats