The team at FTX Future Fund, a philanthropy aimed at funding projects “to improve humanity’s long-term prospects,” including philosophers William MacAskill and Nick Beckstead, resigned yesterday, following the sudden collapse earlier this week of FTX, the large, influential, and previously-relatively-well-regarded cryptocurrency exchange whose proceeds bankrolled it.

Why FTX collapsed is a complicated story that is still being told (I found this account helpful). But among the fallout of its collapse and the financial loss to its CEO, Sam Bankman-Fried (reportedly he lost around 95% of his wealth) is the threat to projects supported by the Future Fund. These include some philosophy projects, mainly on topics related to artificial intelligence, effective altruism, and humanity’s longterm prospects.

In a letter announcing their resignation, MacAskill, Beckstead, Leopold Aschenbrenner, Avital Balwit, and Ketan Ramakrishnan write that they “are now unable to perform our work or process grants… We are devastated to say that it looks like there are many committed grants that the Future Fund will be unable to honor… We are no longer employed by the Future Fund, but in our personal capacities, we are exploring ways to help with this awful situation.” 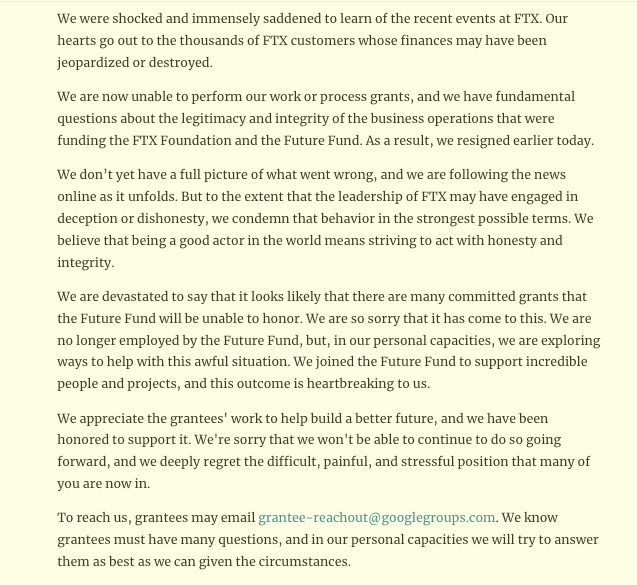 FTX has now filed for bankruptcy.

Disclosure: The Center for AI Safety, a project funded by FTX Future Fund, advertised earlier this year on Daily Nous.

Ripple could do what it always does, sideways trading, then explode