Litecoin [LTC]: Do not get carried away by these bullish signs

Data Suggests Shark Were Behind Litecoin’s 89% Rise To $97,…

Litecoin [LTC] holders are set to close the year on an interesting note as the altcoin sees a historical jump in whale accumulation, data from Santiment revealed.

According to the on-chain analytics platform, during the intraday trading session on 27 December, the count of LTC addresses holding over 1000 coins rallied to a high of 4232 addresses, the highest count since 2020.

During the FTX debacle in November, following the trend in the general market, these key holders sought safety as they dumped their LTC holdings. However, when the FUD in the market became minimal at the start of December, their count began to rally. From 1 December till press time, the count of LTC addresses holding 1000+ coins went up by 3%. 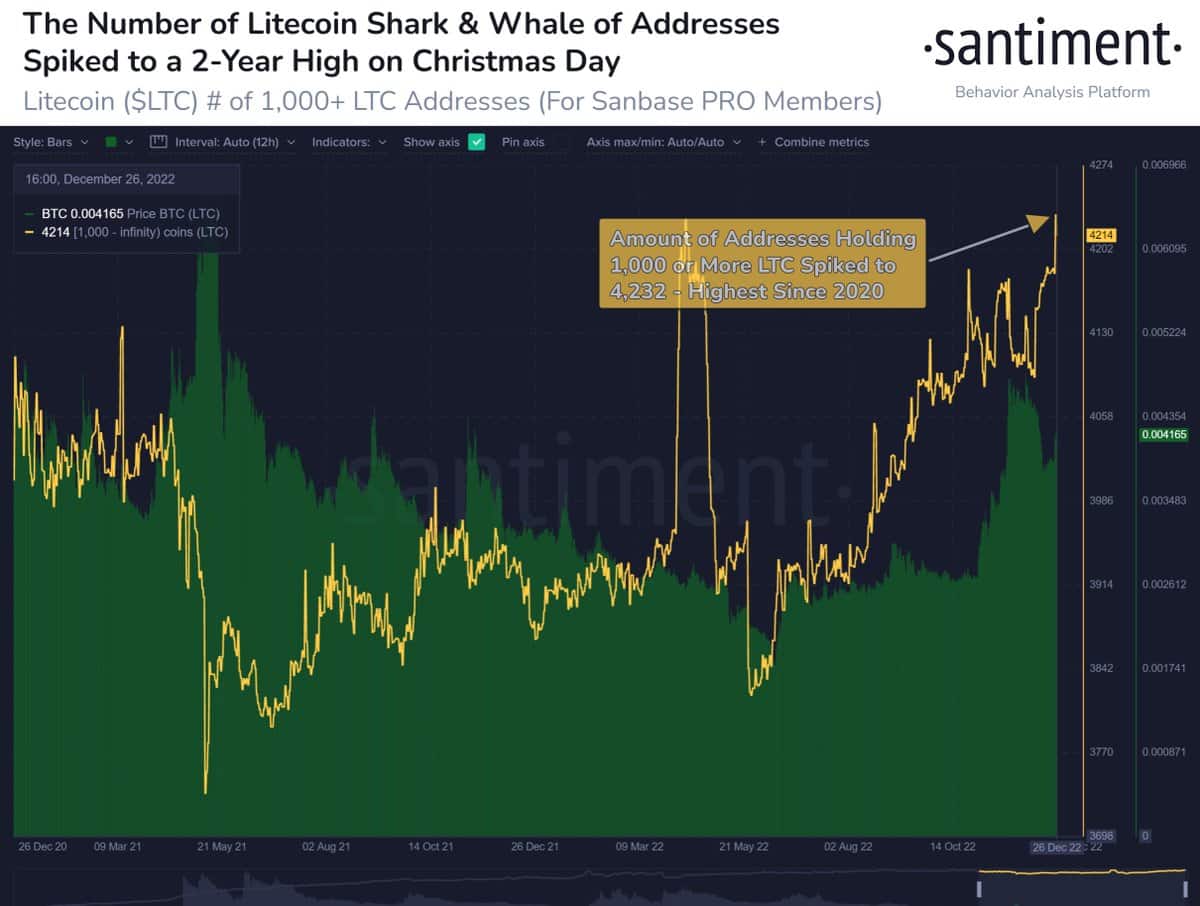 Further, since 12 June, the LTC / BTC price ratio has jumped by over 130%. As of this writing, LTC traded at $67.51, placing it on CoinMarketCap’s list of cryptocurrency assets with the most gains in the last seven days.

Although a local bottom has been reached…

On-chain assessment of LTC’s Age Consumed metric revealed that the altcoin clinched a local price bottom of $56.55 on 14 November following a surge in the metric. This was followed by a temporal decline in LTC’s value, after which it rallied by 19%.

Age Consumed is a measure of the activity of previously inactive coins on the blockchain. A sudden increase in Age Consumed suggests that a large number of previously idle tokens are now being moved or transferred between addresses, indicating a significant change in the behavior of long-term holders.

However, an assessment of LTC’s performance on a daily chart revealed that it commenced a new bear cycle at the beginning of December, thereby putting coin distributors in control of the market.

The MACD line intersected with the trend line in a downtrend on 4 December, marking the start of the bear cycle. Since then, LTC’s value has dropped by 11%.

There has also been a gradual decline in buying momentum causing key momentum indicators to fall below their respective neutral zones.

LTC’s Relative Strength Index (RSI) was positioned at 45.76 at press time. At 17.294 million, LTC’s On-balance Volume has declined by 17% since the month started.

With the Chaikin Money Flow (CMF) logging a negative value of -0.08 at press time, weakened buying pressure lingered in the LTC market.


Read More: Litecoin [LTC]: Do not get carried away by these bullish signs

Data Suggests Shark Were Behind Litecoin’s 89% Rise To $97, But What About Now?