Cardano and Solana decoupled from crypto in explosive price rallies, which altcoin is

Cardano and Solana, two competitors of the smart contract blockchain network Ethereum recently witnessed massive breakouts in their prices. On-chain indicators like social dominance and network activity in ADA and SOL signaled a bullish trend reversal before the tokens posted double-digit price rallies. The next altcoin to follow ADA and SOL in this trend is Litecoin, bulls target a 22% rally in the payment token.

Find out more about three key developments that the Cardano community is looking forward to in 2023 here.

Cardano, the Ethereum-killer smart contract blockchain network and the proof-of-stake layer-1 blockchain Solana yielded 20% gains for holders in a 24-hour period, from January 8 to January 9, 2023. Cardano and Solana’s correlation with large market capitalization cryptocurrencies Bitcoin and Ethereum nosedived, the altcoins decoupled and witnessed a bullish breakout.

The correlations matrix below shows the assets’ correlation coefficient with BTC and ETH: 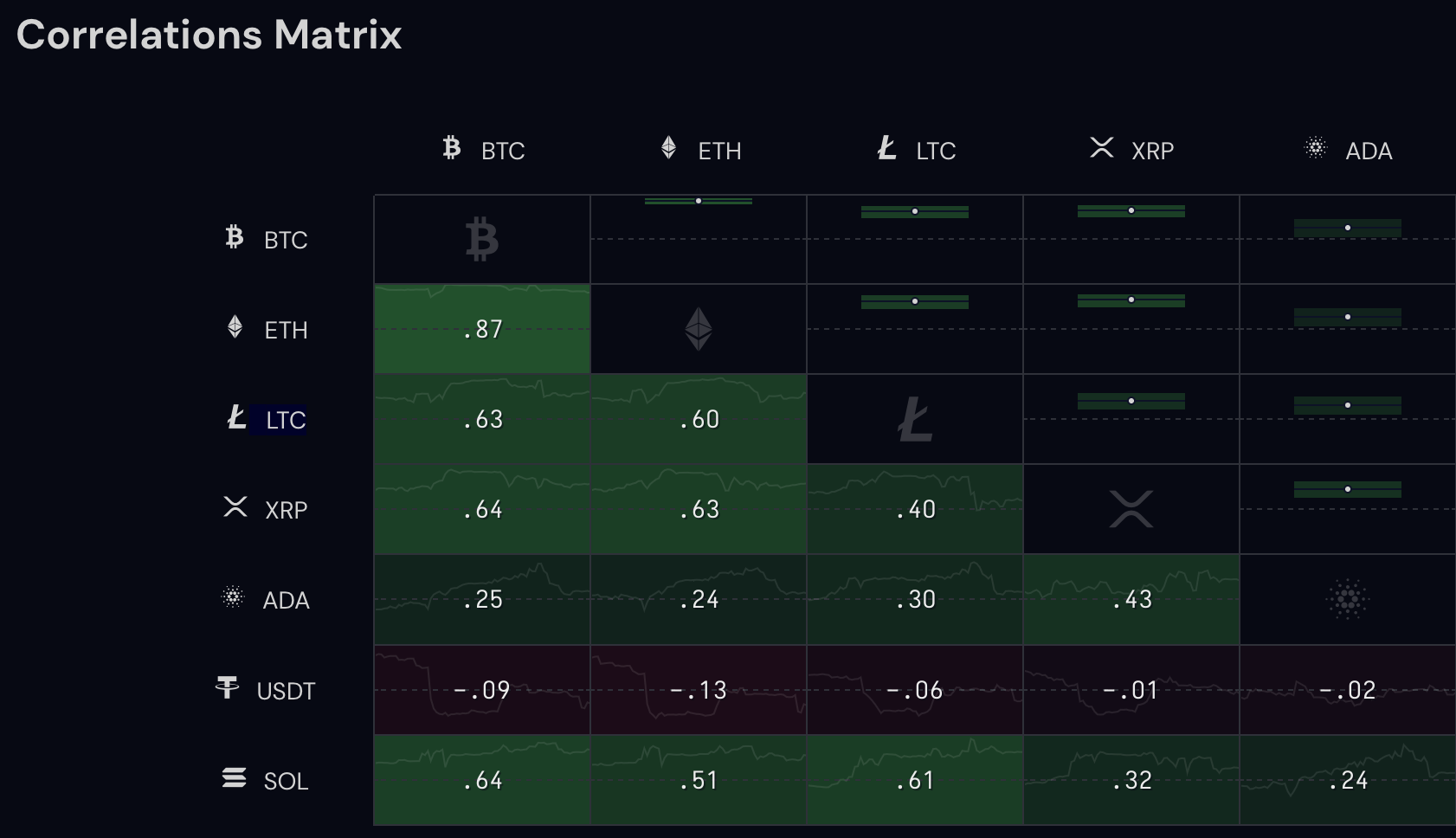 As seen in the table above, Bitcoin and Ethereum are strongly correlated while altcoins like Litecoin, XRP, Cardano and Solana have decoupled or witnessed a decline in correlation. Litecoin’s correlation with Bitcoin plummeted to 0.63.

On-chain metrics like social dominance, network activity and the ratio of daily on-chain transaction volume in profit to loss signaled the trend reversal in Cardano and Solana, based on data from crypto aggregator Santiment.

The chart also shows the number of daily active addresses on the network rising at the same time.

The number of daily active addresses (dark green bars) on the network steadily rose in the last week of December along with price. This was also coupled with a rise in social dominance (blue line) and a steadily rising ratio of transactions realizing profits (light green bars), as well as Cardano price hitting a monthly high of $0.3395.

Solana flipped the narrative from dead project to 22% daily gains

Samuel Bankman-Fried’s FTX exchange collapse, and the migration of NFT projects and dApps from Solana blockchain to Polygon and Ethereum fueled a bearish narrative among SOL holders. The Ethereum-killer altcoin wiped out its gains from 2022 and suffered a steep decline in its price in November 2022.

Solana has flipped the narrative and recovered from a “dead project” to a proof-of-stake blockchain with high development activity and consistent social dominance and volume. The altcoin observed a huge spike in its trade volume after a 22% decoupling from the crypto market.

As seen in the chart above, Solana price has climbed on the back of rising trade volume, popularity among traders on social media platforms and social dominance that hit a peak in the second half of December 2022.

With its declining correlation with BTC and ETH, Litecoin could follow Cardano and Solana higher.

Litecoin price gears up for a 22% rally

A breakout above the upper trendline could push LTC to key resistance at $85.03 and the bullish target at $101.50, a key resistance level from the monthly price chart. As seen in the chart below, Litecoin could witness a 22% rally after the bullish thesis is validated.

Litecoin’s bullish breakout could be temporary and represent a possible blow out or exhaustion move higher before a reversal back down, so traders should approach with caution. 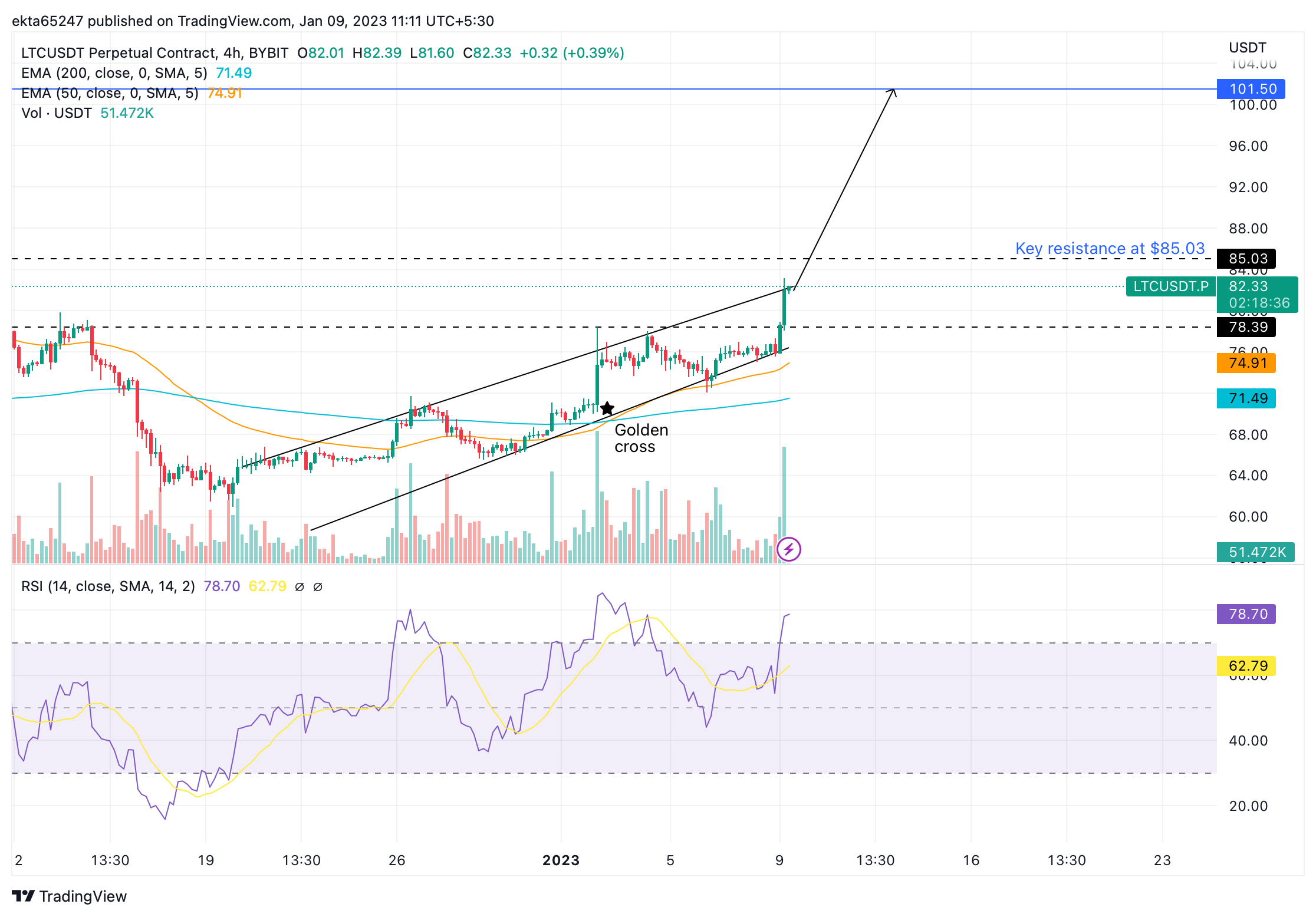 The Relative Strength Index (RSI), a momentum indicator, however, reads 78.70, signaling that Litecoin is overbought. This is a signal to bulls not to add anymore longs, and a potential warning flag. A decline below the 70 level would be a signal to holders to sell their longs and flip short.

If price declines below the lower trendline of the channel, or the two exponential moving averages at $74.91 and $71.90 this could invalidate the bullish thesis for Litecoin.

Read More: Cardano and Solana decoupled from crypto in explosive price rallies, which altcoin is