The ETH/BTC currency pair has declined 8% since Jan 11, as the price increase in bitcoin has been more pronounced than ether’s; BTC hovers near $23K in Monday trading.

Prices: Bitcoin holds steady near $23K for another day; ether remains above $1,600.

Insights: The price of ether declines relative to bitcoin.

BTC/ETH prices per CoinDesk Indices; gold is COMEX spot price. Prices as of about 4 p.m. ET

Bitcoin cracked the lofty height of $23,000 on Monday before retreating just below this threshold in a repeat performance from the weekend that continued to reflect fresh investor optimism.

The largest cryptocurrency by market capitalization was recently trading at $22,968, up almost a percentage point over the past 24 hours, BTC has risen more than 35% since the start of the year amid concrete signs that prices are declining without the economy falling into steep recession.

Still, a number of analysts are unconvinced that the rally will last after a nearly 14-month bear market and a slew of crypto debacles that have shaken the public’s already fragile faith in the industry.

In a weekly commentary, Jeff Dorman, chief investment officer of digital asset investment firm Arca, highlighted bitcoin’s rebound and “a sharp renaissance” of tokens from “applications and protocols largely left for dead,” but also the difficulty in predicting if the current upsurge was “just a bear market rally or if price increases will reflexively spark enough economic activity to justify the price moves.”

“At a micro-level, most individual applications and protocols are still near trough levels of users and activity,” even if many have risen over 100% in recent weeks,” Dorman wrote, adding: “The market is trying to find equilibrium—something between last year’s dead zone and 2021’s euphoria.”

Ether also rose then dipped on Monday but continued to trade comfortably over $1,600, about flat from Sunday, same time. Other major cryptos were mixed with AVAX, the token of base layer protocol Avalanche, and XRP, the native crypto of open source public blockchain XRP Ledger, up more than 4% and 5%, respectively, but AXS, the governance token of gaming platform Axie Infinity, dropping more than 12%. AXS had soared more than 40% on Sunday. The CoinDesk Market Index (CMI), a measure of leading cryptos’ market performance, was up slightly.

Equity indexes closed higher to continue their largely upward trend this year with the tech-focused Nasdaq and S&P 500 jumping 2% and 1.2%, respectively, amid market hopefulness that the U.S. central bank will scale back its next interest rate hike from the 50 and 75 basis point increases (bps) of the past eight months to 25 bps.

Meanwhile, lawyers for Genesis Global told a federal bankruptcy court in New York City on Monday that they’ve been working with creditors’ representatives and the U.S. Trustee’s Office “around the clock” for the past two months to reach a “consensual resolution” with the embattled company’s creditors. Earlier this month, Genesis Global Holdco – the holding company of Genesis Global Capital – and two of its subsidiaries, Genesis Asia Pacific (GAP) and Genesis Global Capital (GGC), filed for Chapter 11 bankruptcy protection – part of the fallout from crypto exchange FTX’s collapse.

In his firm’s commentary, Arca’s Head of Risk Committee Michael Dershewitz wrote that the Chapter 11 filing represented “an endgame” to “a long-running public insolvency.”

“Chapter 11 is a useful process to stay liabilities and negotiate a court-approved restructuring,” Dershewitz wrote, adding: “We cannot add much to predict how these negotiations will end, but we are watching at the edge of our seats.”

Ether has been declining relative to Bitcoin, despite becoming deflationary again.

The ETH/BTC currency pair has declined 8% since Jan 11, as the price increase in bitcoin has been more pronounced than ether’s.

The decrease in the ETH/BTC ratio comes as the supply of ETH has been dropping. ETH’s current supply is currently 2,788 ETH lower than its supply in September 2022.

The relative strength index (RSI), for the ETH/BTC pair has since declined to below 40, reaching levels last seen in December.

A further decline below 30 could provide a compelling opportunity for investors bullish on ETH to add to their positions. 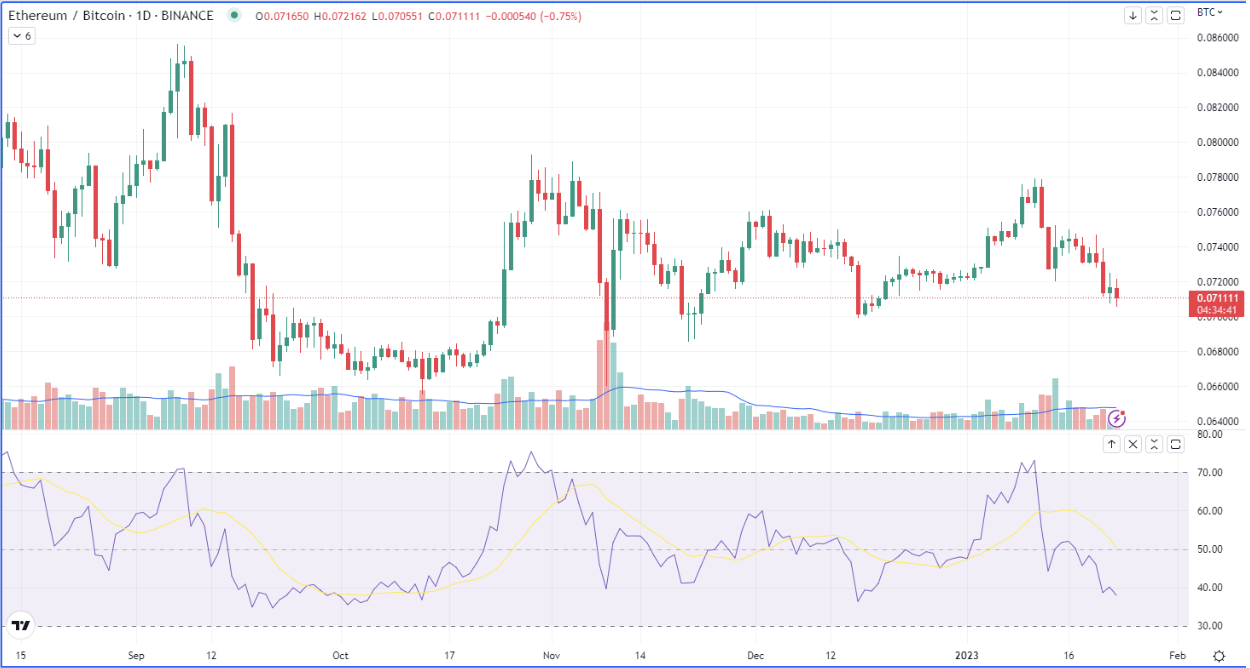